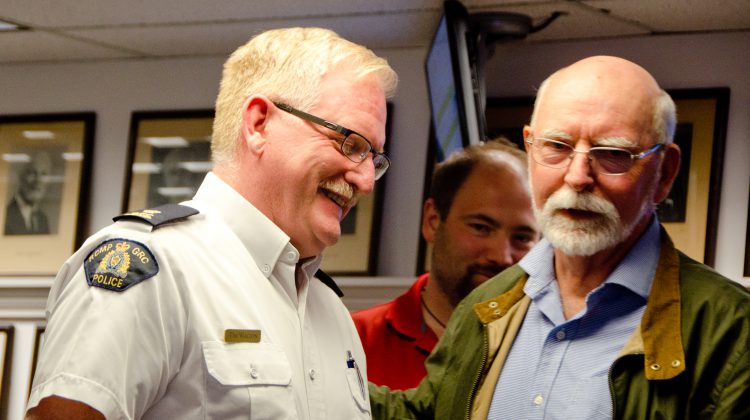 Walton made his final presentation to council as the officer in charge of the Comox Valley RCMP on Monday evening, detailing a reduction in the Courtenay crime rate since the same time last year in property damage, break and enters, and theft.

There was a rise in assaults, with 61 since the beginning of April to the end of June, a rise of eight from the same time in 2017. Ten of those were partner or spousal assaults. There was only one violent crime (a robbery) which resulted in a charge, and the biggest drop in property crime was in thefts from vehicles.

Walton also singled out an increase in police presence in local schools and the downtown bike patrol as successes over his four years of service.

Towards the end of his address to council, Walton began to get visibly choked up, having to pause after expressing amazement at the conduct of officers at the detachment.

“On a personal note, I leave this valley in a few weeks with mixed emotions,” said Walton.

“When I sent in my request to go earlier this year, it was not an easy decision. I will leave a great community, which means I am leaving great people, and great things. My two daughters have had fantastic teachers at Robb Road and Isfeld. My oldest daughter remarked how nice it was to actually know her professors here at North Island.”

He said he wanted to salute the hundreds of coaches who guide kids in the Valley to do “great things, even when it’s raining sideways in November”.

“While Canadians may be known for their apologies, I think we’re known just as much for our appreciation,” said Walton.

“In my travels around the country, and across this globe, I’ve always tried to learn how to say thank you.”

He then said thank you to council in several languages, followed by applause from both the elected members around the council chamber and those in attendance.

Walton will be holding his final coffee meet and greet at Hot Chocolate’s Café in downtown Courtenay from 10 a.m. to 12 p.m. tomorrow.