RCMP Musical Ride in the Comox Valley for the weekend 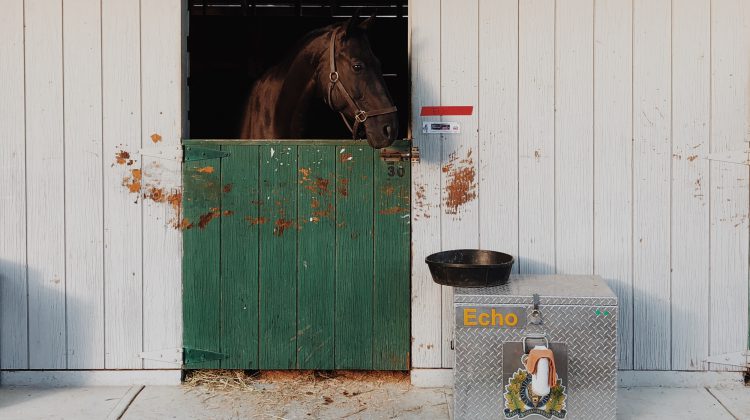 RCMP Musical Ride horse Echo is pictured while relaxing in a stall at the Comox Valley Exhibition Grounds on August 23rd, 2018. Photo by James Wood/98.9 The Goat/Vista Radio
Story by Troy Landreville
COURTENAY, B.C. – The Mounties have arrived and are set to put on a show.
Members of the world-renowned RCMP Musical Ride are in Courtenay and will perform tonight, tomorrow, and Sunday at the Comox Valley Exhibition.
The RCMP Musical Ride consists of a full troop of 32 riders and their horses, who perform intricate figures and drills choreographed to music.
These movements demand the utmost control, timing and coordination.
Corporal Kyle Kifferling has been with the Musical Ride for five years, and said it’s a Canadian tradition.
“My appeal is our heritage and traditions,” said  Kifferling, originally from Southey, Sask. “The first show was in 1901, so it’s been going on for 117 years.”
He added, “I think exactly what the appeal is: the image of Canada. Everyone thinks of the Mountie in the red serge on a black horse.”
Kifferling said a lot of work goes into the ride.
“It’s a three year posting,” he said. “The members are doing this full time. From January till May, we’re rehearsing twice a day, Monday through Friday.”
For those who haven’t seen the ride, it’s quite the spectacle,  Kifferling said: “It’s the visual appeal: just seeing 32 horses working together… it’s something amazing to see.”
Becoming part of the ride is an arduous process. You have to be a member of the RCMP for at least two years to apply for the team.
Tryouts in Ottawa are five weeks long, and hopefuls are assigned to a “basic” horse, Kifferling said.
“If you’re selected from the basic horse, you’ll take a full-on transfer to Ottawa and you’ll be posted with the Musical Ride for two-and-a-half years, with the first six months just learning how to ride the horse, and two years of travel,” Kifferling.
Each tour, Mounties are assigned to a different horse.
CVEX president Mike Trimble said he feels priveleged that the Musical Ride is part of the event this year.
“I think it’s incredible that they’re here in conjunction with the fair,” he said. “They won’t be back to B.C. until 2022, not necessarily to Comox Valley, just to B.C. So come out and enjoy them.”
Trimble said he “almost fell off his chair” when he found out that the Musical Ride will be part of the event.

Performance times are 6:30 p.m. tonight and Saturday, and 4:30 p.m. Sunday at the Comox Valley Exhibition Grounds.