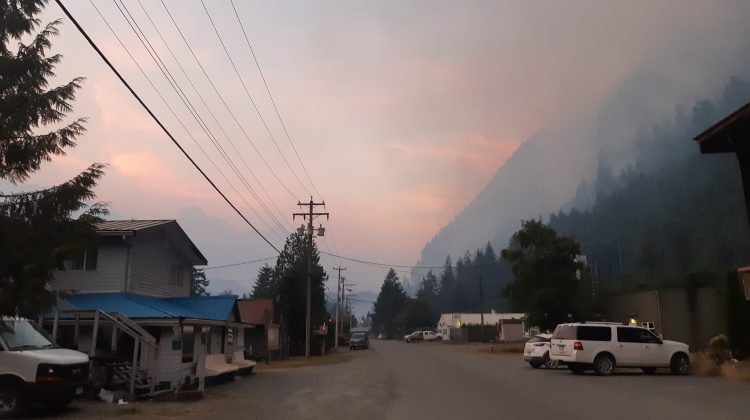 Smoke over the town of Zeballos. Photo by Cole Kelly/2Day FM

VANCOUVER ISLAND, B.C. – With the arrival of cooler weather, crews are trying to get traction on wildfires burning across the northern Vancouver Island.

The fire has not shown much growth overnight and remains at approximately 168 hectares. Yesterday, there were two fire retardant drops via air tanker between the South Flank of the fire and the hydro lines.

“As of today we have 26 firefighters on that fire with structural protection units also engaged in that area,” McCool said. “We also have three helicopters and a piece of heavy equipment working in that area, as well.”

Current priorities on the south flank are to have personnel brush around the hydro lines to help prevent the fire from reaching the lines.

On the north flank of the fire, guards are being created using machines and will be tied into the Zeballos River in an effort to push the fire back up the mountainside. Personnel will also be setting up a wet line between the Tsunami Evacuation Site sea cans and the base of the mountain.

A bit of good news is the fact the fire is burning mostly away from the village of Zeballos and mostly up-slope, according to McCool.

“That said, the powerlines are in the area, so we’ve put some fire retardent in that area to make sure the fire doesn’t spread to those powerlines,” he added.

McCool said the Pinder Creek fire is 260 hectares in size and is 20 percent contained, with 25 firefighters battling the fire, with three pieces of heavy equipment and three helicopters being used.

“The situation being, it is the only road into the area so we are continually trying to maintain access through the area for individuals of Zeballos to make sure they can still access in and out of the town,”McCool said.

Thirty-three firefighters are battling the 20-hectare blaze, which is roughly 25 percent contained.

Two aircraft are also being used to fight the fire.

The fire has grown to 90 hectares, with 17 firefighters assigned, with one piece of equipment and one aircraft being used.

“Crews are working to build guards on that fire, and we’re also utilizing helicopter bucketing to try to slow its progress,” McCool said.

You can help to protect your home. Here are a few easy fire prevention tips from the FireSmart Homeowner’s Manual:

Pick up your own copy of the FireSmart Homeowner’s Manual at the Post Office or Village Office.