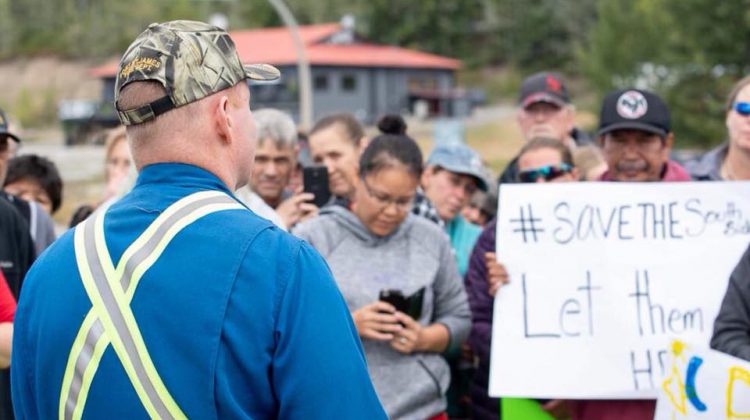 BULKLEY-NECHAKO – B.C Wildfire released a statement earlier today explaining why a fleet of fire support vehicles was not deployed to the Southside of Francois Lake. 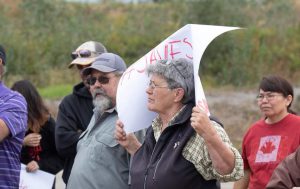 A protester stands with her sign in Burns Lake. Photo from Carla Lewis

28 trucks of firefighting supplies and water suppression units, belonging to SafeGuard, were waiting in Burns Lake for about three days to cross the ferry over Francois Lake, where some residents have stayed despite evacuation orders to fight the wildfires themselves.

Roughly 100 people showed up in Burns Lake to protest this morning, as the trucks were “released” from their contract with the B.C Wildfire Service, and sent home.

According to a press release posted to the BCWFS Facebook page, after judging some parts of the area, the owner of SafeGuard, Jeff Kelly, determined that their equipment wasn’t suitable for the job.

“The BC Wildfire Service deferred to the contractor’s knowledge of their system, and it was determined by the contractor that this high-capacity water delivery system was not an appropriate tool for this fire (the Babine) complex.”

However Kelly said the wording in that statement was “very poor.” 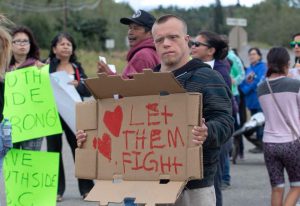 A protester in Burns Lake.
Photo from Carla Lewis

“The release said this equipment was determined by SafeGuard to not be valid for the entire Babine complex of fires. It’s not true. We only looked at one portion of one fire,” he said.

According to Ebony Griffin, media spokesperson for the BCWFS, the Babine fire complex refers to seven active wildfires in that area, spanning an estimated 130,630 hectares.

“To generalize to that extent is not fair. I didn’t even assess the entire area for that one fire, because we weren’t given access to a helicopter. I wouldn’t say a full assessment was done,” said Kelly.

That wasn’t the only discrepancy between the statements of SafeGuard and the BCWFS.

Griffin said that SafeGuard had told the BCWFS the only space they could set up their equipment, which needs a large body of water to operate, was near the ferry on the south bank of Francois Lake. 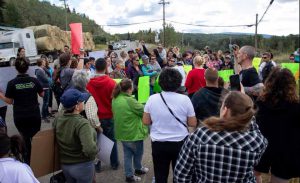 A crowd of protesters near a fleet of fire supply trucks. Photo from Carla Lewis

“No, we gave three viable options. We assessed two places on the north side of Francois Lake and one on the south side. But they didn’t feel the fire was threatening the north areas at the time,” he said.

When responding to questions about a rumoured “gag order”, wherein SafeGuard was not permitted to speak to media, Griffin said there is “no way BCWFS would ever do that.”

“He’s a free citizen to talk and say as he wants,” she said.

Kelly said a confidentiality agreement is a “standard phrase” in contracts with the BCWFS, and that he had only been allowed to speak to the media as of earlier this afternoon.

“It’s a confidentiality clause that every contractor signs, it’s a given. It’s ridiculous that they would try to pull that.”

The BCWFS spokesperson wanted to stress they are also “exploring other water delivery systems that could be more effective”, but could not specify what they were.

Kelly said his fleet had not yet been deployed anywhere else, and that they were headed home.