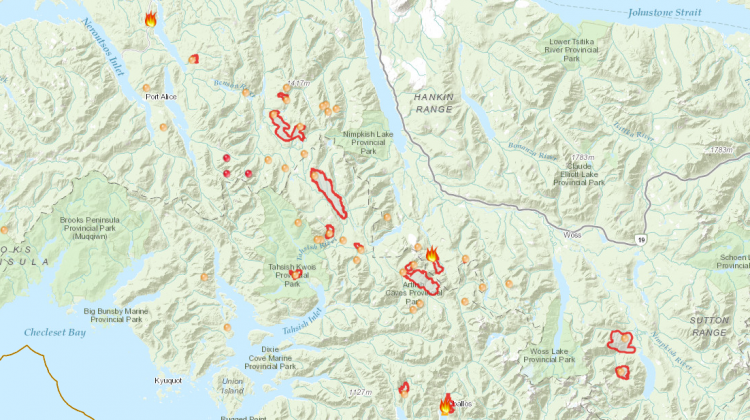 VANCOUVER ISLAND, B.C. – Firefighters are getting the upper hand on one of the 36 wildfires currently burning in northern Vancouver Island.

The Larry Lake fire, at 20 hectares, is currently being held, meaning it is no longer out of control.

“There’s 15 firefighters working on that today, and we have 80 percent containment which is higher than (yesterday),” BC Wildfire information officer Lynne Wheeler said.
“There are no road closures taking place right now and we’re actually waiting for a scan which is great news. So we’ll be looking for hotspots and if we don’t find any we may move to saying it’s out but we’re not saying that until we do the scan.”

Today, six firefighters and six structural protection unit personnel are working on the fire which has consumed 168 hectares.

Helicopters will be bucketing if the skies are clear enough.

Crews are preparing for a direct attack in some areas of the fire, and are still working to protect the powerlines.

“They said yesterday in their summary that it was looking good,” Wheeler said.

Caused by lightning, the fire is consuming roughly 260 hectares.

There are 32 firefighters working on the fire today, along with three pieces of heavy equipment and two-plus helicopters.

The fire size and status remains unchanged, according to the Zeballos Emergency Program. Priorities continue to be protecting homes and infrastructure on the north end of the fire, and power lines on the south end.

The north flank of the fire is still active, and flare-ups continue to be seen behind evacuated homes. The sprinkler system already in place will be maintained and expanded as necessary.

On the South flank, a rappel (RAP) crew is working to establish a heli-pad in a forest regeneration area. This will enable ground crews to set up a wet line on the south flank to protect hydro lines. Brushing work around the hydro poles has been completed.

“They are still trying to keep everything open and have been building guard along the flank,” Wheeler said. “It is 20 percent contained but they are making good progress on this fire as well.”

A new wildfire is burning on an ecological reserve on East Redonda Island.

The fire is 45-hectares, is not contained, and is not threatening any structures.

Fire information officer Dorothy Jakobsen said this is a “modified response fire,” meaning the land manager – in this case BC Parks – has a management objective of allowing the fire to burn, rather than to allow fire suppression activities which could damage the area’s ecosystem.

If those trigger points are breached, the fire will be re-assessed and a new strategy will be discussed.