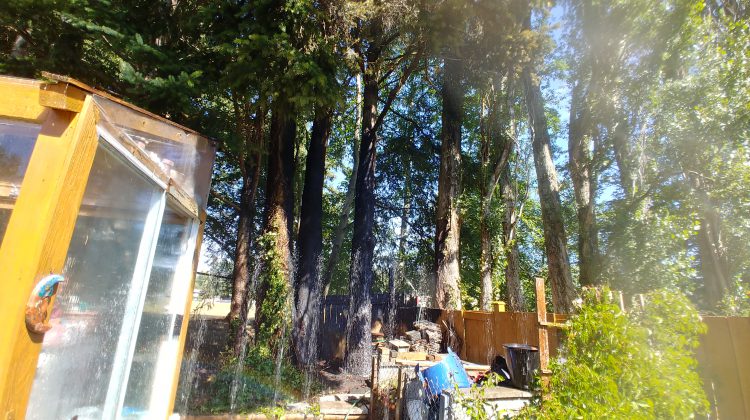 A photo from the fire scene.

COMOX, B.C. – The quick actions of Comox firefighters prevented a fence fire behind a local school from becoming something much worse.

Late this morning, the Comox fire department received a call about a fire behind the fence near 1400 Noel Avenue, according to fire chief Gord Schreiner.

When firefighters arrived, the fence was fully involved, with flames candling into the trees and reaching roughly 25 feet.

“(It was) pretty showy,” said Schreiner.

The department sent its rapid intervention vehicle, which is a small truck equipped with 200 gallons of water.

The first crew to arrive was able to get water into the trees and knock the fire down before it was able to extend into other trees.

“It’s just matter of taking it back down to the ground and mopping it up,” said Schreiner, at the scene.

“We’ve got plenty of water, plenty of staff and the fire has been put out, we’ve got some sprinklers on it for the rest of the day and we’ll be checking on it every hour.”

The cause of the fire is still unknown.

“It’s an extreme fire time right now so there could be a number of reasons,” said Schreiner.

He advised people to be very cautious and if they see a fire, to immediately report it.

“Unfortunately in this area, people did smell smoke about an hour ago, but they thought it was the smoke that we’ve had hanging around here for the last couple weeks so they just took it as regular business, but then shortly afterwards they saw the flames that was associated with the smoke.”

-with files from Big Ginger