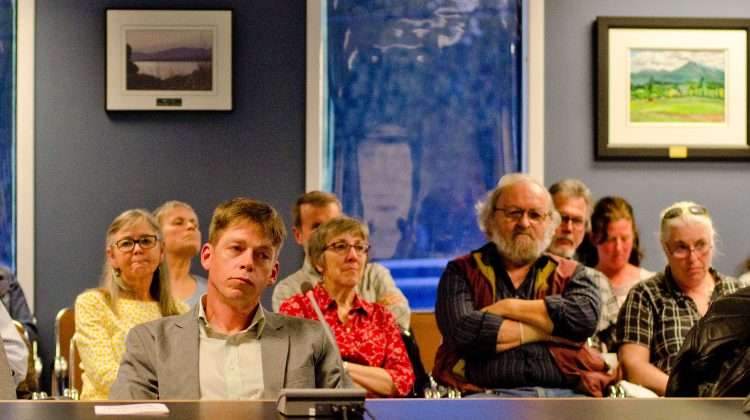 Christopher Mackenzie reacts to the denial of his bottling proposal on Sackville Road in Merville during a meeting of the Advisory Planning Commission of the Comox Valley Regional District on May 3rd 2018. Photo by James Wood/98.9 The Goat/Vista Radio

COURTENAY, B.C- A controversial proposal to bottle water in Merville has been defeated.

On Tuesday afternoon, the board of directors for the Comox Valley Regional District considered the application for a third and final time.

Two residents of Sackville Road in Merville had applied to the CVRD for their property to be re-zoned in order to allow for the development of a water bottling operation, after the provincial government granted a license for water extraction back in November.

If approved, the operation would have seen the extraction of up to 10,000 litres of ground water per day from the family well of Christopher Scott Mackenzie and Regula Heynck.

The project had received conditional approval from the province, and is waiting on a rezoning decision from the district.

Pushback from the community had been organized, with a group called the Merville Water Guardians forming. The proposal has also been met with denial from every meeting held on the matter by various CVRD commissions.

Today was the final meeting. There was brief discussion on the matter, during which Director Edwin Grieve spoke at length about his personal opposition to the idea, while citing the widespread negative reaction amongst the public and the nearly uniform disagreement from external agencies, including K’ómoks First Nation.

Director Rod Nichol also spoke up, expressing disappointment at the province for “downloading” the question to the CVRD.

After those statements, the directors voted without opposition to defeat the proposal.

Despite the defeat, however, Mackenzie is still planning on bottling water from the property’s well. He plans on making that happen by heading north, and applying to the Strathcona Regional District.

He did touch on how he was feeling, in the wake of the denial.

“When someone tries to take something away from you that you’ve acquired in all fairness, and in an open environment where we came directly to them and told them our plan right from day one, and they were on board. Somewhere along the lines, someone didn’t like it, and started telling everybody that their wells were going to dry, and that just wasn’t the case,” said Mackenzie.

“Anybody that believes that, doesn’t understand the hydrology of the aquifer, and what kind of quantities of water we’re talking about here. We’re talking about trillions of litres of water, 25 times size more the size of Comox Lake. I’m only taking a miniscule amount.”

He remained determined to bottle the water.

“Just because I’ve decided to sell a little bit of it, that has brought forward questions about not only the sustainability of it, but the morality of it,” said Mackenzie.

“People don’t like the idea of selling water. Well, that’s the province’s decision to make, not local concerned citizens. They don’t have anything to worry about. If they have a shallow well, it’s already going dry. It’s probably dry right now. We have not removed any of the water from the aquifer yet. But we will.”

Mackenzie said he hadn’t begun the process of talking to the Strathcona Regional District yet, after being away on holidays and suffering from illness. He indicated that the plan is to find a lease site in the district, but one has not yet appeared that would be suitable.

As for whether or not he would challenge the decision by the CVRD, which was raised in documents submitted by his lawyer, Mackenzie did not give a firm answer.

“You’ll be the first to know.”

Bruce Gibbon, who has been heavily involved with opposition to the project, hoped that the decision by the CVRD would be the “end of the line”, though he he stated he was aware that Mackenzie had filed an amendment to the license that would allow him to truck water off-site.

Gibbon stated he had been contacting local governments to inquire about their rules on water bottling, and asking to speak with them if they allowed it in order to have them re-consider.

“We’d like to see everyone avoid bottling water out of our aquifers,” said Gibbon.

As for the material presented by Mackenzie in support of the bottling plan, which outlined the province’s expectations for the project’s impact, Gibbon was unmoved.

“That document that his lawyer presented last minute was 27 megabytes, a huge document. It basically said the same thing, six different times, and didn’t add any new information. It was just a last ditch effort to try and download a lot of information on the directors. I don’t think anything has changed. We know what his plan is, we know what it’s been all along, and 10,000 litres is not a huge number, but we’re totally against taking the water out of our aquifers and bottling it and selling it. We don’t have anything against him personally, we think the government made a mistake.”