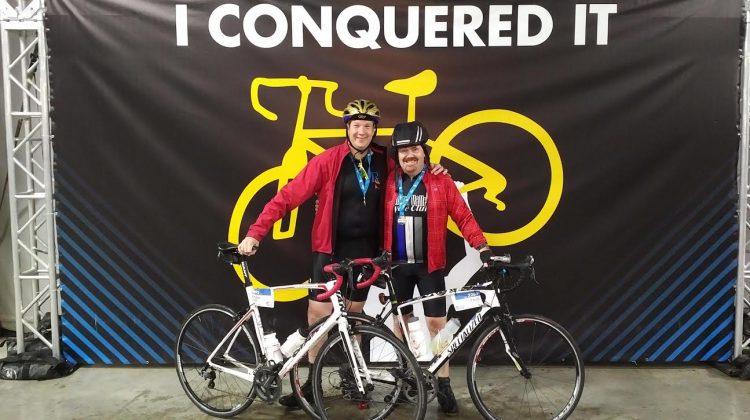 COMOX, B.C. – The Ride to Conquer Cancer was a soggy, arduous, and ultimately rewarding experience for Comox’s mayor.

Through the ride and various fundraisers in the Comox Valley leading up to last weekend, Ives and his friend Ryan Sykes, raised roughly $10,000 for the BC Cancer Foundation.

Ives, who personally collected $4,460 in donations, took part in the ride for the first time in 2016 when the cyclists rode from Metro Vancouver to Seattle.

The 2018 edition had cyclists riding from Cloverdale to Chilliwack, and Chilliwack to Hope. However, on day two, the riders were rerouted from Hope because of a wildfire in the area.

On #NationalDogDay Hunter was a big hit @TheBCRide in Chilliwack bringing lots of smiles and getting lots of love from some of the 2500 riders in rainy conditions #comox #mayorsdogrules pic.twitter.com/Cvd1ItTr2r

“The most impressive thing is (that) we raised collectively $10.6 million towards the BC Cancer Foundation,” Ives said.

Sykes rode in memory of his dad Rob, who died from melanoma 10 years ago.

“It was Ryan’s fifth year in a row, so he gets the coveted gold helmet for that,” Ives said. “He was pretty pumped about that and it was certainly an emotional experience for everyone involved.”

After weeks of dry, hot weather, conditioned changed last weekend and rain poured down on the riders.

“The first day started out dry but then about an hour into it, it got wet,” Ives said. “And once you get wet on a bike on a bike, even though you have good gear, you just get wet. The main thing was to keep moving. Of course we had stops for lunch and stuff like that, but you didn’t want to stop too long because you got cold.”

Ives said, damp weather aside, it was a great experience.

“It’s a real good cause and a real good activity,” Ives said. “Certainly when you’re riding out there, especially in the rain you’re thinking of all the struggles that people have dealing with cancer. Yeah, you’re getting a little bit wet but, it’s not that bad compared to what people are going through.”

Ride to Conquer Cancer teams have grown over the years. Ives noted that the Brainiacs went from 38 riders to more than 380 participants, and they raised in excess of $600,000 for the cause.

“The possibilities are endless to get groups together and go and support a good cause,” Ives said.