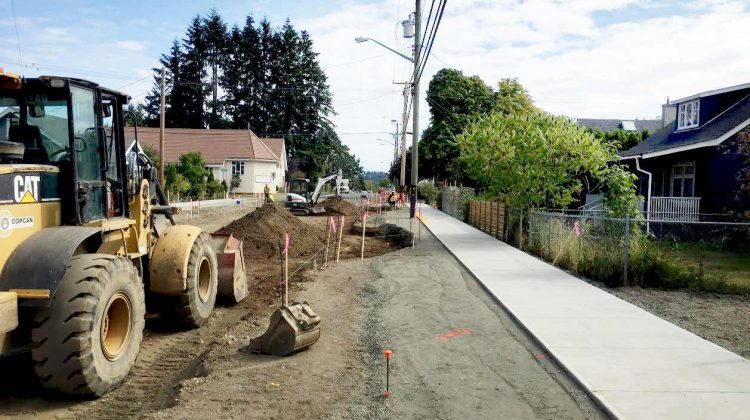 COURTENAY, B.C. – The focus on 5th Street contruction work is now shifting to putting the road back together and enhancing sidewalks, bike lanes, and driving lanes.

With the replacement of 60-year-old pipes and upgrades to underground systems now complete, the future of 5th Street between Fitzgerald and Menzies is starting to take shape with new sidewalks, tactile strips for the visually-impaired, and new curbing to make way for rain gardens and protected bike lanes.

After the long weekend, the existing sidewalks between Harmston and Fitzgerald Avenues will be removed to make way for crews to pour new sidewalks and curbs in September.

This work is an important step to be completed prior to repaving the street, according to a City of Courtenay release.

To safely complete the work, at times motorists will experience single-lane alternating traffic and parking in the block will be affected until completion of the project. At times road access will be limited to local residents.

“To avoid delay, we ask commuters to take alternate routes during this period,” the release states.

With students returning to school next week, parents and students are reminded that the 5th Street Complete Street project is an active construction site, with work zones shifting regularly throughout the construction area.

Parents and students walking or cycling to school are being asked to use an alternate route until the project is completed in early October. Parents are also encouraged to speak to their children about alternate walking and cycling routes.

The City of Courtenay states that “improving accessibility was identified as a priority for both Council and the public when planning improvements to 5th Street.”

The project is expected to be completed in October.

The $3.25 million 5th Street Complete Street Pilot project is entirely funded by the federal Gas Tax Fund, under the Strategic Priorities – Local Roads, Bridges, and Active Transportation.
The corridor will reopen to all modes of transportation in October.