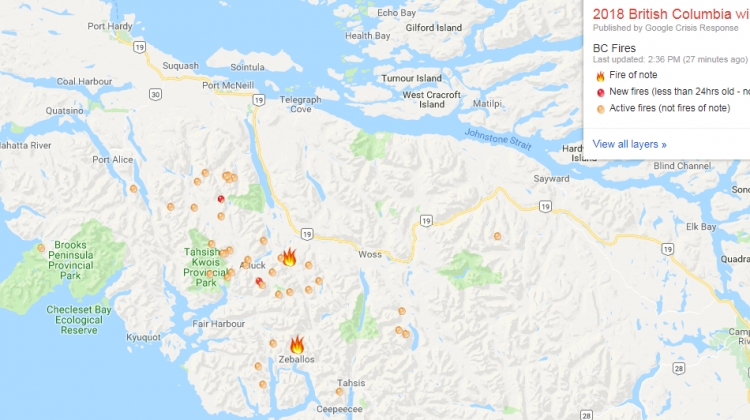 VANCOUVER ISLAND, B.C. – Fire crews are making headway on the Gold Valley Main wildfire near Zeballos.
Comox firefighters assisted in an interface fire in the Zeballos area and after 19 days there, the team has returned home.
According to a BC Wildfire update just before 11 a.m. today, “due to the hard work of the crews and current conditions” the wildfire was estimated to be 40 percent contained.
Containment is when there are no available fuels to burn between the guard and the fire perimeter.
The 168-hectare fire was discovered nearly a month ago, on Aug. 11, and was believed to be caused by lightning.
And while the fire behaviour remains low, this fire is still considered out of control, meaning it is not responding to suppression action.
“For the next two days, we are expecting nice weather but the fire behaviour is not expected to increase significantly,” according to BC Wildfire. “On Friday, precipitation is expected and this will help to increase the containment of this wildfire.”
Currently there are some remaining hotspots within the fire perimeter and smoke may be visible from the Village of Zaballos and other surrounding areas.
There is no immediate risk to the homes and building in the evacuation order area, and there is good protection in place along the hydro line.
Due to concerns regarding this fire, the local government has issued an evacuation alert for the area east of the Zeballos River (town side) and an order for homes to the east side of Pandora hill and north of Sugarloaf Bridge on the Zeballos River. The alert and order can be viewed by clicking here (www.zeballos.com).
Today there were two firefighters assigned to the fire with one helicopter and one piece of heavy equipment.
Pinder Creek Fire (alongside Zeballos)
As of 11:09 a.m. today, the 260 hectare wildfire was 20 percent contained.
As with the Gold Valley Main wildfire, the Pinder Creek fire behaviour remains low, but is is still considered out of control.
Rain on Friday is expected to help greatly in containing this fire.
Growth on this fire is mostly uphill and away from the road. There has been no spread on this fire outside the guard. Control lines (guards) on the south end of the fire are holding.
Today, 16 firefighters are assigned to this wildfire, with one helicopter that is supporting the suppression efforts along the Zeballos Forest Service Road.
A guard has been completed along the north flank and no spread has occurred outside this guard.
A contingency guard is also complete and crews will continue to mop up (100 feet in where possible) from the northwest to the northeast.
East Redonda Island Fire
The fire burning on an ecological reserve has now grown to more than 200 hectares.
It continues to be a  “modified response fire,” meaning the land manager – in this case BC Parks – has a management objective of allowing the fire to burn, rather than to allow fire suppression activities which could damage the area’s ecosystem.
“A lot of what we do is harsh on the soil, like using heavy equipment or perhaps a chemical if we’re using a retardant,” Coastal Fire Centre information officer Donna MacPherson said. “It’s also very steep so there’s wasn’t a lot of great options on that land and the fire was felt to be natural to the ecosystem.”
There are 13 firefighters on the control line along with two helictopters. The purpose of the control line is to prevent the fire from spreading outside of the ecological reserve.
“We have a control line just outside of the ecological area, and that control line is also supported by sprinklers,” MacPherson said. “The fire has come up to that line in a couple of places but the line is held.”
The fire started Aug. 24. It’s suspected that it may have been human caused, but is still under investigation.
East Redonda Island is located on the west side of Homfray Channel, north of Desolation Sound Marine Park.
Ecological reserves are areas in B.C. selected to preserve representative and special natural ecosystems, plant and animal species, features, and phenomena.
Expected rain over the weekend is expected to help the wildfire fight.
“That’s all wonderful news from a firefighting standpoint,” MacPherson said.