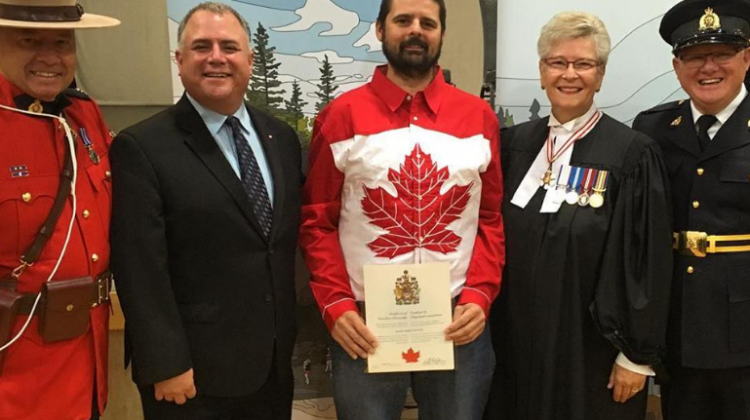 Facebook photo
COURTENAY, B.C. – Jeff Beeston has made Canada, and Courtenay in particular, his home away from home.
And now the owner of Trail Bicycles is officially a Canadian citizen.
The native of Perth, Australia was sworn in as a Canadian citizen during an Aug. 30 ceremony in Parksville.
It’s been quite a journey, quite literally, for Beeston, who originally visited the area on a working holiday to go mountain biking and snowboarding, and fell in love with the Comox Valley.
“That was just a pipe dream, right?” he said. “You come here on holiday, you know you have to leave, and I met a girl. Eventually we got married. It took five years but we got immigrated and moved in 2006.”
When he first arrived on vacation, Beeston knew very little about Canada and expected snow and freezing temperatures pretty much 365 days a year.
He was pleasantly surprised.
“When I found out I could ride my bike all year round, I was pretty stoked,” he said. “I never left, really. I left to go back to work in Australia and I was living in London (England) at the time, so I came back on a holiday again a second time. The third time I got to move.”
Almost from the day he put down stakes in Courtenay, Beeston has been connected to Trail Bicycles.
“I used to work for the previous guy for free to help him out when I was on a holiday, did some free work for them to keep them going through the summer,” Beeston said. “By the time I was ready to move, they asked me if I wanted to buy it (the business) from them.”
Beeston quickly changed the name to Trail Bicycles.
He’s been a landed immigrant for the past 13 years and applied for his citizenship a year-and-a-half ago.
“I knew I wasn’t going to leave,” Beeston said. “I really love it here. I didn’t have to give up my Australian (citizenship) so it was easy to be both.”
Citizenship day was exciting for Beeston. “I wasn’t sure what to expect but it was really good. The lady who was officiating… she did a really good job of making everyone feel special, but still made it funny and relaxing.”