Calls for RCMP service in Comox down slightly from last year 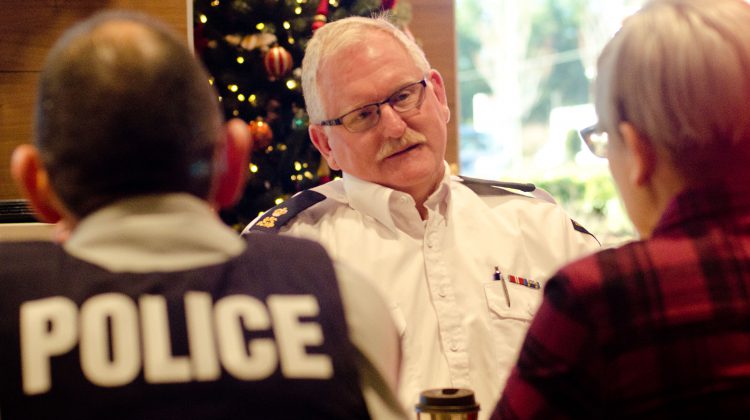 Comox Valley RCMP Inspector Tim Walton is pictured during a discussion session in Courtenay on Dec. 20, 2017. Photo by James Wood/98.9 The Goat/Vista Radio

Walton is transferring to Victoria, where he’ll be taking charge of traffic services across Vancouver Island.

“I leave you in the capable hands of Inspector Mike Kurvers and the team that I’ve built over the past four years,” Walton told council members. “While Canadians may be known for their apologies, I think we’re better known for our appreciation. Council, staff, and to you the public, I thank you for making Comox a great place to live and to work and to play.”

Walton laid out crime stats in the Town from April 1 to June 30 of this year.

Over that three-month period, there were four assaults, three cases of harassment, two uttering threats files, two auto thefts, seven bike thefts, one case of a B&E in a business, three cases of B&E’s in other buildings, three cases of residential B&E’s, 12 fraud investigations, 11 cases of theft, and 25 thefts from vehicles.

All told, there were 512 calls for service from the start of April to the end of June. That’s 18 fewer files than the same period in 2017.

“I’m always heard it’s better to end anything on a positive note, so I’m happy to report that the calls for service haven’t really increased this quarter year-over-year,” Walton said.

“But I have to remind you that the last year was our busiest year ever on record, so we’re still up there but we haven’t gotten any worse.”