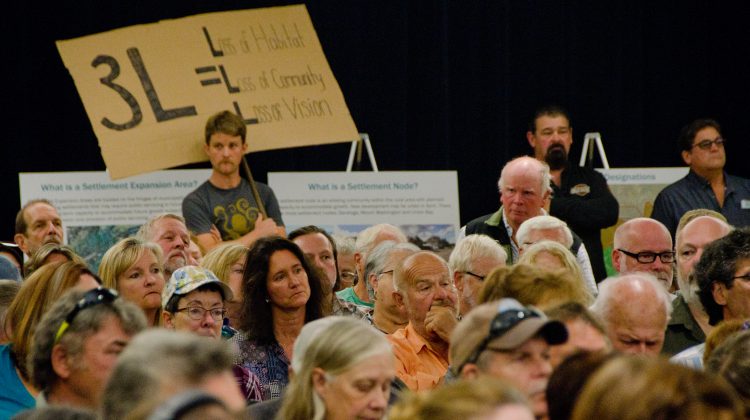 Jeff Hoy holds a protest sign at the back of the room at the Florence Filburg Centre on Thursday, September 7th, 2018, during an open house on a possible development near the Stotan Falls by 3L Developments Inc. Photo by James Wood/98.9 The Goat/Vista Radio

COURTENAY, B.C- An open house for a controversial development near the Stotan Falls was held in downtown Courtenay on Thursday night.

The event is part of an ongoing process which would result in the development’s inclusion in growth plans for the Comox Valley.

The proposal is from 3L Developments Inc, and aims to build 1,000 homes on land in and around the meeting point of the Puntledge and Brown rivers, with private water and wastewater services.

3L won, with the B.C Supreme Court ordering the CVRD to consider the development as an amendment to their plans for growth in the Valley.

The open house was part of a consultation plan recently approved by the district, which is looking at the change to the growth plan as a standard amendment.

The event was held in the main room of the Florence Filburg Centre in Courtenay, with more than 100 people filling the chairs and lining the corners of the space. 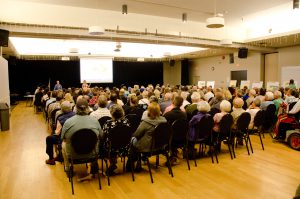 A crowd fills the room at the Florence Filburg Centre on Thursday, September 7th, 2018. Photo by James Wood/98.9 The Goat/Vista Radio

After the main event got underway at 7:00 p.m., CVRD planning manager Alana Mullally spoke about the district’s growth plan and what that means for planning in the Valley.

Neither Kabel Atwall or 3L owner David Dutcyvich spoke during the company’s block of time, with development consultant Mark Holland detailing what the company saw as the benefits of the Riverwood development instead.

Holland is a recent joiner to the project, and mentioned multiple times that he wished he could have gotten involved sooner, given the fraught history of the proposal. According to Holland, he was brought onboard by the company to work as a consultant for the amendment process, coming onboard in the last few weeks. 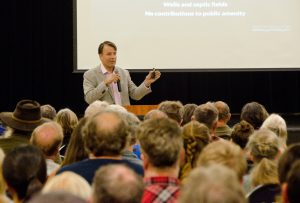 After both presentations, a lengthy question and answer session brought up multiple concerns about the project, along with expressions of support.

At least one man apologized for what he saw as delays by the district, and recommended 3L approach the City of Courtenay instead, while another man angrily asked for the company to be given a chance for private water treatment. 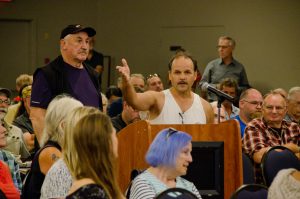 The man who apologized to the company speaks to the room at the Florence Filburg Centre on Thursday, September 7th, 2018. Photo by James Wood/98.9 The Goat/Vista Radio

Another man asked to be presented for a bill of sale for the land from K’ómoks First Nation, and said he “did not consent” to the development. 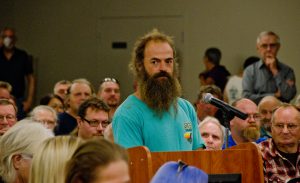 The man who asked for a bill of sale speaks to the room at the Florence Filburg Centre on Thursday, September 7th, 2018. Photo by James Wood/98.9 The Goat/Vista Radio

One point that came up multiple times was the question of whether or not the company’s offer of a free park in their development plan would be accurate, due to existing requirements for a riparian setback from the river for any development in the area.

Will-Cole Hamilton, a Courtenay resident, raised the question to Holland, with the two engaging in a brief back and forth after Holland said he couldn’t speak for the company’s exact plans, and Hamilton pointed out he had been doing the majority of the speaking throughout the evening for 3L.

“Let’s be real here,” said Holland, during the exchange.

“You don’t let everybody walk through your property just because they want to. Some of you might, but that’s out of the generosity of your heart. If your neighbours come in, start messing with your property, or you start feeling like you’re being abused by people or taking advantage of, you will fence it, you will keep them off. This is what happens. I’m going to suggest that the ten years, of a frustrating process, is not going to make this landowner really friendly, (and) say ok, we don’t have to support development, you’ll have a park anyway, because there is no legal way to prove that. You might trespass, you might get on there and trespass, and that’s your decision, but lets not presume that we’re going to go in to this keeping it rural, and as a park, if there is no other development occurring.”

Reached after the meeting concluded, Holland provided some more details about where the company stands on the current process.

He indicated that he had been brought on-board to help with policy and planning issues, and stated he knew the planning staff at the district and had worked with them before. He also said he would speak for 3L in “some situations, and not others”.

The consultant said that the company is aiming to move with the CVRD through the amendment process, which will come to the board of directors on October 2nd, 2018 for a possible first reading.

“They do have the ability to say simply no, we won’t process this,” said Holland.

“We cannot predict what a local government is going to make a decision on, and particularly because that will be a few days before the election so we don’t know how this will all play itself out.”

Holland said that in his view, the 3L proposal is a neighbourhood for the Valley, and wanted to see the granting of a settlement node by the CVRD.

“After that we need to roll up our sleeves and get back to work with the community,” said Holland.

“This is what the project wants to do, but we need to work with the community to refine that. I think it’s very unhelpful when a development team goes into a back room and comes out and says “we know what’s best for you”, I don’t like that at all.”

As for the possibility of the land becoming a park “for free”, Holland didn’t believe it would happen.

“That is never going to happen, not after the history on this project,” said Holland.

“I actually have a personal fear that if that dream continues, that this place is going to get logged. I don’t know that they will, or that they’ll sell it to somebody who does it, but the beauty and importance that this place needs to be and to some degree has been is actually at risk here, and that’s why I think this is something that the community and the developer need to work together on, in upcoming phases.”

He couldn’t speak for what the company would do if the CVRD decided to not process the amendment on October 2nd. As for the question of 3L approaching Courtenay, he believed it would be highly unlikely, and incredibly complex.

“Courtenay is not a trapdoor for the CVRD on this project,” said Holland.

“That’s not what’s going to happen here. That would be calling it a trapdoor where you have to climb Everest, to get over it, to get to the trapdoor. There is no quick way that way.”

As for the event itself, Holland believed it was well-run, and believed he had heard a lot of fear and concern over water, the environment, traffic, and a host of other concerns, taking copious notes.

He also stated that the district’s growth plan was “not the Bible”.

“I think that’s what’s important here, is that a project that offers a lot of value really be treated seriously and go through the due process. That’s why I’m hoping that the board says let’s go through the whole process and really have that conversation thoroughly.”

Holland also said the whole process was “one of the great things about democracy”.

“There are comments made about countries that have revolutions after elections,” said Holland.

“Really what happened is that they never learned to lose, and so when they didn’t get their way, all hell breaks loose. What I appreciate about this is that land is contested. We have ownership, we have ownership rights. We collectively have to work on the approvals process, and there are many different perspectives and values.”

The next time the project will be up for discussion will be on October 2nd, at the CVRD board office.

According to Kabel Atwall, the development’s project manager, the company will indicate their intentions on October 3rd if the CVRD declines to consider the amendment.