Road, sidewalk to be removed along 5th Street between Harmston and Fitzgerald 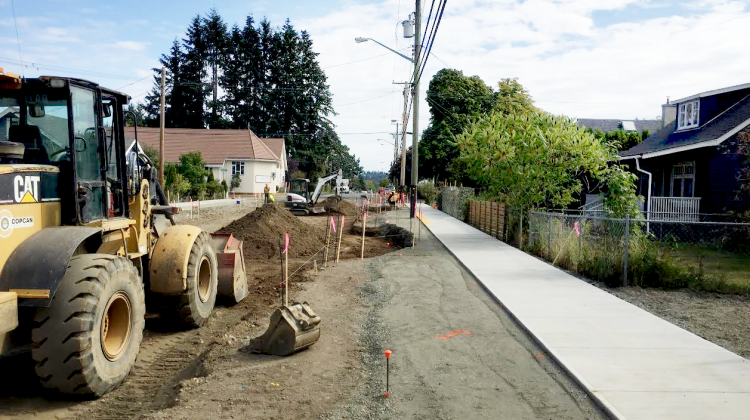 Work on the 5th

COURTENAY, B.C- The construction on 5th Street is heading south this week.

Starting tomorrow, the sidewalks and roadway between Harmston and Fitzgerald Avenues will be removed, in order to make space for crews to pour new sidewalks and curbs over the last two weeks of September.

“To safely complete the work, this section of 5th Street will be closed to general vehicle and pedestrian traffic with local access maintained for all businesses and residents,” read a city advisory.

“Parking in the block will be restricted until completion of the project.  To avoid delay, commuters should take alternate routes during this period.  6th Street will continue to be the signed detour route during the closure.”

Later this month, the intersection of 5th Street and Fitzgerald will be closed temporarily to remove sidewalks and curbing before replacement. The exact times for that work will be announced when a schedule is confirmed.

“The contractor will ensure clear pedestrian access to all businesses on 5th Street is maintained during this phase of street improvements,” read the advisory.

“The current local traffic restrictions between McPhee and Harmston Avenues will be extended to include the block between Harmston and Fitzgerald Avenues during this phase of construction. The 5th and Harmston Avenue intersection is anticipated to remain open to northbound and southbound traffic but may be reduced to single-lane alternating at times. The contractor continues to try and minimize impacts while working to complete the project in October.”

The project is being funded in it’s entirety by money from a federal tax on fuel.

The improved corridor will reopen to all modes of transportation in October 2018.