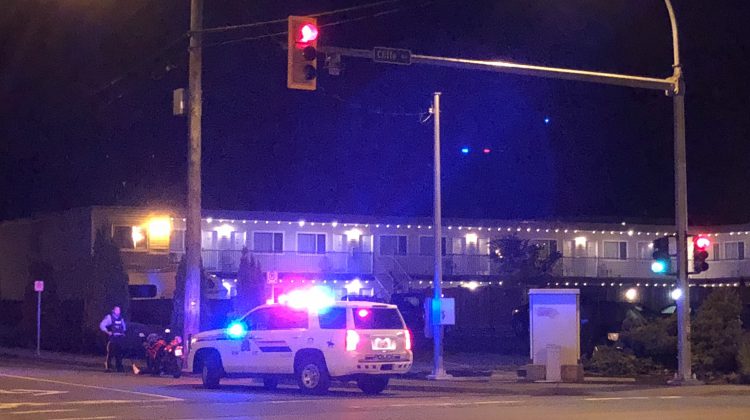 An officer of the Comox Valley RCMP stands near a motorcyclist who was stopped for driving while prohibited on the night of Sunday, September 9th, 2018. Photo by James Wood/98.9 The Goat/Vista Radio

COURTENAY, B.C- The police in the Comox Valley arrested a man on a motorcycle this week.

According to the local RCMP detachment, a patrolling officer saw a motorcycle with no lights around 10:20 p.m. on Sunday night, along Cliffe Avenue in Courtenay.

“The officer conducted a traffic stop with the motorcycle and found that the driver is prohibited from driving,” read the detachment’s announcement.

The motorcyclist was stopped near the intersection of Cliffe Avenue and 19th Street, and the man has an upcoming court date.

Officers are also looking for two men in connection to a report of stolen plants in Comox on Monday evening. Several plants, including rhododendrons and shrubs, were taken from the 1700 block of Beaufort Avenue and the 400 block of Church Street

“A witness reported seeing a couple of suspects on Port Augusta Street at approximately 4:45 a.m.,” read the detachment’s notice.

“The suspects were described as two males, average build associated to a pickup truck with no canopy.”

Officers also caught a man suspected of night-time skulking, after receiving reports on September 5th about a suspicious man wandering into yards and looking into vehicles around 1:55 a.m.

After the reports, police went to the 1900 block of Tull Avenue in Courtenay, and found the man inside a vehicle. He was arrested for mischief, and trespassing at night. He’s since been released, with an upcoming court date.

The final file detailed by the detachment was a case of destructive driving. A man had been driving a brown car on September 8th, just after noon, and went onto the median at Ryan Road and the Island Highway.

He drove along the median, and over a traffic sign.

“He was last seen pulling into the Superstore parking lot,” read the notice.

“Investigators are being assisted by witnesses and the investigation is continuing.”

If anyone has any information about these files, they should contact police.