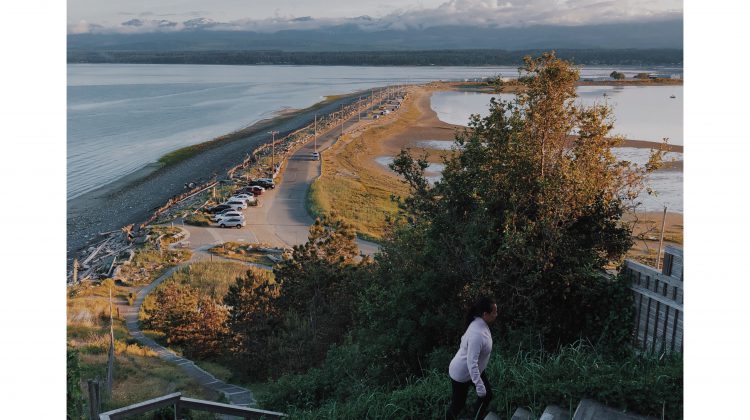 A woman walks up the steps at Goose Spit on May 21st, 2018. Photo by Vista Radio staff

COMOX, B.C. – A well-known exercise spot in Comox will be out of commission until the end of October.

The Nob Hill Staircase between Goose Spit Park and Yates Road closed Sept. 10 and will re-open for exercise enthusiasts at the end of October.

The existing stairs, known to some recreation and exercise enthusiasts as the ‘Goose Grind,’ were constructed in 2011 and have been well worn by exercise devotees, according to a CVRD release.

New stairs of a similar design will be installed between Sept. 10 through to late October.

The new stair casings will be constructed of aluminum which should provide long term resistance against the severe marine environment, exposure from sun and wind, and extensive use by visitors. Aluminum stair casings allow for light, hand-built stair construction, which is mandatory for the steep sand slope.

New on this staircase will be “pedestrian pullouts,” similar to highway pullouts, to let faster climbers pass.

Once construction is complete, the new stairs will have a similar design to the existing stairs.

“The earthen stair design has been chosen for its relative ease of construction and cost effectiveness, meeting the geotechnical and environmental constraints of the steep sand slope, and providing a preferred landing surface for those running stairs for exercise,” the release noted.

The portion of Nob Hill Greenway, from Goose Spit Park to Yates Road, will be closed during construction.

The climbing stairs from Yates Road to Moore Road, and Mulholland Drive will remain open. A sample of the new stair design can be viewed along this route at the west end of Mulholland Drive.
Once the stairs are in place, Nob Hill will be planted with resilient, native, sand dune plants to help stabilize the sand slope.

When the staircase opens, pedestrians and pets will be asked to stay off the slope and use the staircase only, as the CVRD notes that plants play an important role in preventing erosion on these steep slopes as the plant roots hold loose soil in place, while leaves, stems and flowers protect soils from wind and sun exposure.