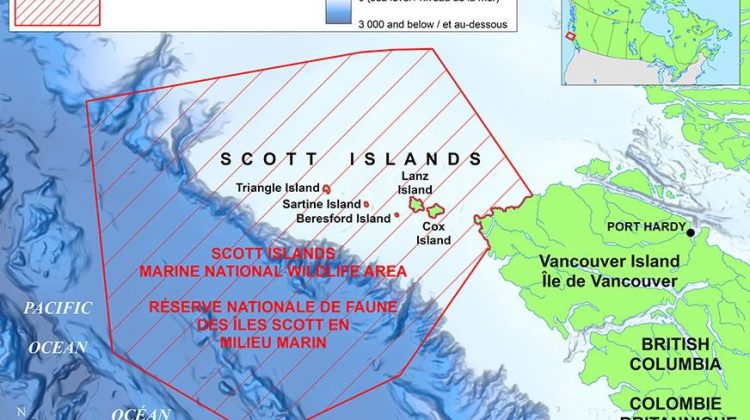 VANCOUVER ISLAND, B.C. – The federal government said it has taken a “significant step” towards protecting a large area on the northern tip of Vancouver Island.

On Sept. 13, the government announced the creation of the Scott Islands Marine National Wildlife Area.

In close collaboration with First Nations, the province, and local stakeholders, it is the first area to be protected under the Canada Wildlife Act, according to a release from the federal government.

The new 11,546 kilometre marine protected area is habitat for Vancouver Island’s seabirds, species at risk, and other wildlife.

“With some of the most diverse marine ecosystems on Canada’s Pacific coast, the Scott Islands area provides key ecological breeding and nesting habitat for 40 per cent of British Columbia’s seabirds, including 90 per cent of Canada’s tufted puffins and 95 per cent of Pacific Canada’s common murres,” the release states.

At the same time, Shell Canada noted that it will voluntarily release almost 50 000 kilometres of exploratory permits in the same region. Shell Canada’s Country Chair, Michael Crothers, announced the release of permits in the Queen Charlotte and Tofino basins, which overlap with about one third of the newly designated Scott Islands protected area.

The government will also provide funding for the management of the Marine National Wildlife Area through Canada’s Nature Legacy Fund.

From 2018 to 2023, more than $3.2 million will be dedicated to support collaborative management, research, monitoring, and the removal of introduced predators that are harmful to seabirds, according to the release.

An advisory committee, with technical and science advisory working groups, will also be established to provide advice and input into the development of a management plan for the Marine National Wildlife Area.

A final management plan is expected in 2019.

The announcement of the Scott Islands protected area comes on the eve of a G7 meeting in Halifax, where Canada will host environment, oceans, and energy ministers from the U.S., Germany, France, Italy, Japan, the United Kingdom, and the European Union to discuss protecting the world’s oceans and reducing plastic pollution, among other topics.

“Our government is taking bold action to protect oceans, nature, and the places Canadians love. Protecting the Scott Islands marine area is one more step toward reaching our ambitious goal of significantly increasing the amount of nature conserved in Canada,” said Catherine McKenna, Canada’s Minister of Environment and Climate Change.

“Together with the provinces, territories, and Indigenous Peoples, we can reach this goal and pass on a healthy environment to our kids and grandkids.”