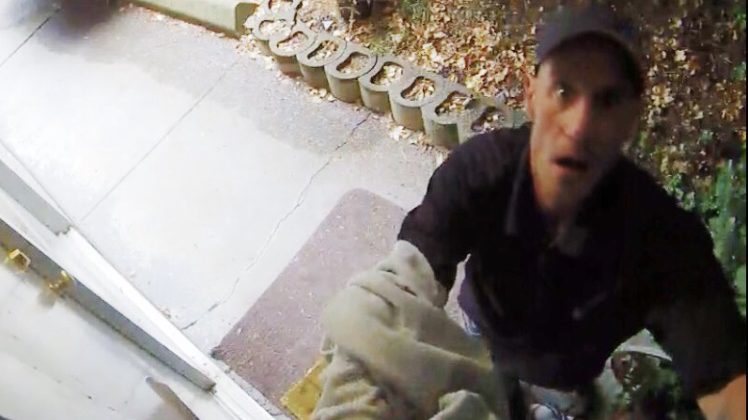 A photo of the man, sourced from security camera footage courtesy of Cara Oh.

COURTENAY, B.C- A Comox Valley man has been arrested after a security camera recorded its own theft in August.

According to homeowner Cara Oh, who lives in west-central Courtenay, the theft took place on August 25th around 2 p.m.

“We were at home, minding our own business when this guy started poking around my garbage/recycling area,” said Oh, in a message to the MyComoxValleyNow.com newsroom.

“We had no idea he was out there until a couple of hours later when we noticed the movement alert from the camera. When we checked it (expecting to see the neighbour’s cat, as he’s usually the culprit) and we see this guy. My partner thought I was kidding when I was giving him the play by play as I watched the footage, and said “aaaannnnd he took the camera.” I don’t know if he thought he could make a buck off of it, or if he thought the evidence of him creeping around my house was IN the camera or what. It’s all so ridiculous.”

She said she called police and reported it stolen the same day, and later posted video footage of the theft to local social media pages.

“But there’s not a lot else I can do. I went around to each of my neighbours houses and showed them the video so they’d be aware and when doing so, found out that two other neighbours have had their belongings stolen from their yards/driveways recently too. I also posted the clip online in a variety of groups to try and alert as many people as possible.”

According to Constable Monika Terragni, a spokesperson for the Comox Valley RCMP, a 44 year old man from the Comox Valley was arrested for theft under $5,000, with an expected court date of September 27th, 2018 in Courtenay.

When told of the arrest, Oh was pleased, though she indicated she hadn’t gotten the camera back.

“I wasn’t really expecting to, but there’s a small part of me that’s always at least a little hopeful,” said Oh.

“I’m a sap like that. I did send the RCMP a copy of my receipt for the camera I bought to replace the stolen one though, so maybe one day I’ll see that money back. Maybe. Hahah!”