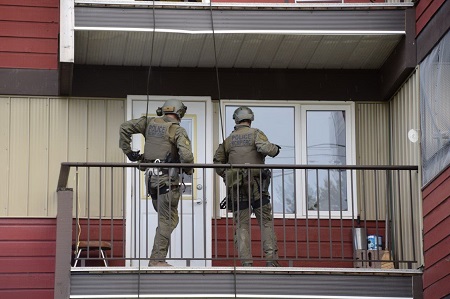 Officers present at the apartment building where Nepper was arrested. Photo courtesy the RCMP.

WHITEHORSE, YT – The man accused in last week’s Port Alice postal explosion will be in custody until at least Thursday.

According to a report from the CBC, 73-year-old Leon Nepper’s bail hearing on Monday was adjourned after the Crown prosecutor told the court that police needed more time to determine if he will face more charges in connection to the incident.

On September 11th, Roger Nepper opened a package in Port Alice that exploded, resulting in significant injuries, including the amputation of three of his fingers.

Nepper’s wife, Shirley Bowick, suffered burns in the incident. She said nails from the bomb were also lodged into Roger’s stomach.

He was rushed to hospital, but has since been released.

His brother Leon was arrested late last week in the Yukon.

Leon will remain in custody until his next court appearance, which is scheduled for Thursday, September 20th.