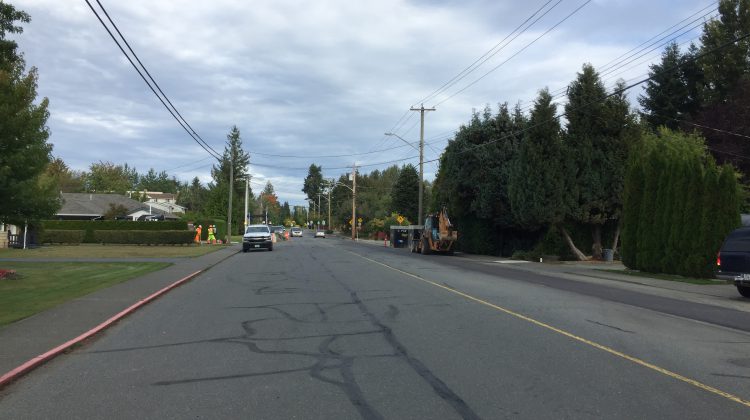 Work to replace a water main along Willemar is near completion. Photo courtesy of the City of Courtenay

COURTENAY, B.C. – The contractor is nearing the finish line on the Willemar Avenue water main replacement project, with road repaving largely completed earlier this week. Some final work is ongoing in the boulevard area and on private property.

The project has been under construction between 17th and 21st Streets since the beginning of July, and involved a complete replacement of a 540 metre length of 64-year-old cast iron water main which was nearing the end of its expected lifespan.

According to a City of Courtenay release, “the new water main has greatly increased the capacity of the old main and will serve current and future residents in the area for decades to come.”

Ryan O’Grady, the City of Courtenay’s Director of Engineering Services, said the upgrade was one of the City’s major capital projects for 2018.

“This project was a high priority for replacement and we are extremely pleased the bulk of the work is now complete,” O’Grady said.

“Thank you to the neighbourhood and commuters for their patience during construction, as well as the contractors for their hard work on this project.”

The project is part of the City of Courtenay’s overall asset management strategy; identifying and prioritizing infrastructure renewal throughout the city to help operate existing assets for the longest possible duration and for the lowest possible cost over their lifespan.

To learn more about asset management in the City of Courtenay, click here.