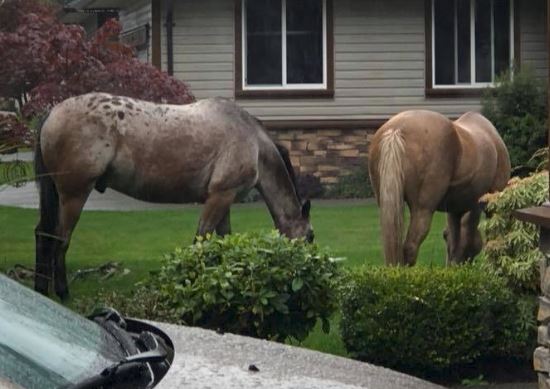 Jaclyn Stuve snapped this photo of two horses grazing in a front yard of a home in Comox. Photo courtesy of Jaclyn Stuve

COMOX, B.C. – The case of two horses that broke loose on their property in Comox today has a happy ending.

It’s been confirmed to MyComoxValleyNow.com, that Comox Valley RCMP officers were able to corral the horses and return the animals to their property.

The horses were initially spotted just off King Rd and Torrence.

“They are in a good mood, so they’re highballing it up and down the road here,” Tom Morfitt, a Comox resident says.

Jaclyn Stuve snapped a photo of the horses grazing in a resident’s front yard. She later saw them cornered by Mounties.

“They were around the corner and there was two police cars, and they looked like they were trying to tie a rope or something to be able to hold onto them,” Stuve told MyComoxValleyNow.com.

There were no reports of any horse-related injuries or damages from the incident.