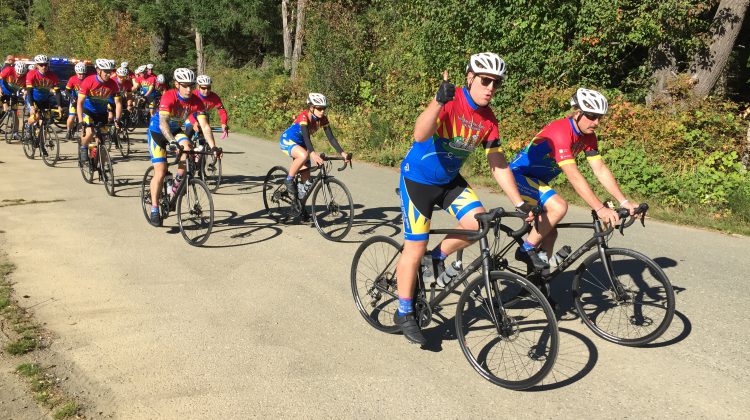 Made up of 22 cyclists riding along the shores of Eastern Vancouver Island to raise funds for kids with cancer, Tour de Rock is a personal journey for team member Alli Roberts.

It’s one that started years ago when her friend’s son, then five, was diagnosed with leukemia and subsequently became a junior rider.

“I watched the experience that he had and what a difference Tour de Rock made for that family,” Roberts told MyComoxValleyNow.com, during the team’s pit stop at Merville Hall this morning. “I became immediately a fan and started fundraising and supporting and doing what we could.”

The boy is now a teenager with three brothers.

“His mom texted me the other day and said Tour de Rock helps families be able to still play together,” she said.

As people can only participate once as a rider, this will be Roberts’ first and only experience riding with Tour de Rock, which is in its 21st year.

The team members are made of mostly of RCMP officers and emergency responders, who share a common goal of sending kids to Camp Goodtimes, which offers a summer camp experience for children and teens battling cancer, and their families.

“It’s been amazing,” she said. “It’s a hugely emotional journey, but just seeing how the community is coming together, there are communities where people don’t have a lot to give, and yet they are so generous. It’s a global issue. The battle against cancer, it’s a thing that everybody gets behind. It’s an honour to be part of it.”

Roberts said she has two “amazing” junior riders, ages seven and 11, who have battled cancer.

“Just being able to do something for them, that’s all I can ask for,” Roberts said. “They both went to Camp Goodtimes with their siblings, and it was an amazing experience for them. We ride for the kids.”

Over two weeks, the Tour de Rock team cycles from one end of the Vancouver Island to the other, covering 1,000 kilometres and visiting more than 27 communities along the way.