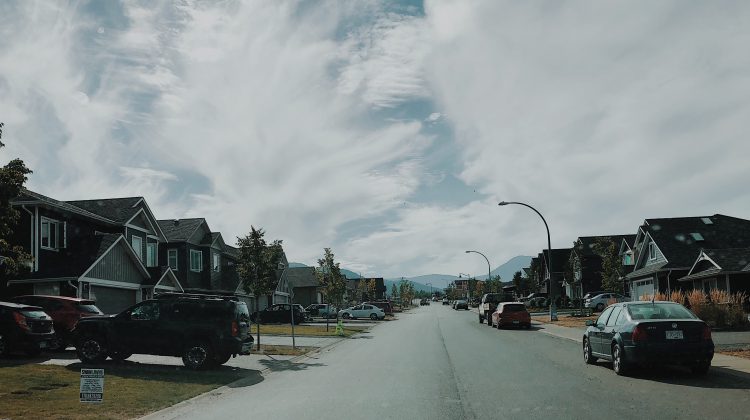 The general area of the family's home on Kendal Avenue, facing west towards the mountains. Photo by James Wood/Vista Radio.

CUMBERLAND, B.C. – A family of three in Cumberland is voicing their concerns about speeders in the small village.

In an email correspondence with MyComoxValleyNow.com, Shawn Bourgoin said since moving to Cumberland last April, his family has observed a multitude of vehicles disobeying the 30 km/h speed limit on Kendal Avenue.

Shawn said he and his wife have a five year old son, who is very active and out on the streets daily playing with other neighbourhood children.

“There are 10 or more kids within the immediate vicinity of our house that like playing in the yard or riding on the street/sidewalk. This community has attracted a lot of young families and the safety of the children needs to be priority for more people who live or rent in this community,” he wrote.

Bourgoin noted that during the summertime, within a four-hour period, he would yell at 10 to 15 vehicles traveling as fast as 40 to 50 km/h.

“People would probably say that it’s probably just young drivers or teens, but I have been shockingly disappointed that this is not the case. I have seen young drivers, moms, dads, grandmas, military personnel, dump truck drivers and construction and trades workers all travelling 40-70 km up and down the street,” he said.

“We did report our concerns to one of the owners of the construction companies and he did say he would talk to the workers, but it didn’t seem to make that much of a difference or if they were sub-contractors.”

He explained a recent unfortunate event. When walking their son to school, he and his wife motioned to a driver traveling faster than the 30 km/h school zone limit. According to Bourgoin, the driver “swerved towards my wife and then sped off.”

He said that his family reported that incident to the RCMP after they documented the vehicle’s license plate number.

“Residents in the area and parents, dropping off their kids, park on that side of the street, which prevents walking on the shoulder of the street. There seems to be space for proper parking and a sidewalk. Due to the lack of sidewalk in this stretch, this causes parents and kids to walk on the street, which should not be the case. Are sidewalks mandatory for a school zone? “

Bourgoin noted another incident, where he called out someone driving “well over 60 km/h up and down Kendal”.

“He tried to deny that he was speeding, saying that his car’s muffler is the reason it sounds fast. He was clearly going faster then 50 kilometres an hour. He has since made it his vindictive amusement to rev his car’s engine almost every day at all hours of the night since that verbal altercation in early June,” he stated.

Bourgoin said that his family had set up a road safety awareness statue, which was removed following vandalism. The family now has signs from BCAA set up.

“Over the past few months we’ve had a few instances of what we believe to be retaliation to our feedback to drivers and their reckless driving, which include nails behind our tires, being told off aggressively and recently, our car had dog feces thrown at the back window. Again, probably someone who doesn’t like being told what to do or that they are speeding,” said Bourgoin.

He noted that because Cumberland is such a well-loved walking/biking community, it’s attracting more and more young families.

“We are only one of many parents who are concerned and frustrated with the disrespectful behaviour of their neighbours who blatantly disregard the speed limit. Many owners and renters have voiced their frustration to the Village and on social media regarding this, while others have chosen to leave this community. I believe that the owners of the house for sale half way up Kendal on the right are selling for this exact reason,” he stated.

“Without more parents or concerned community residents, this problem will continue and it will only be a matter of time before an accident occurs.”

Bourgoin said that a group of concerned parents will attend Cumberland council’s next meeting to voice their thoughts on the issue.