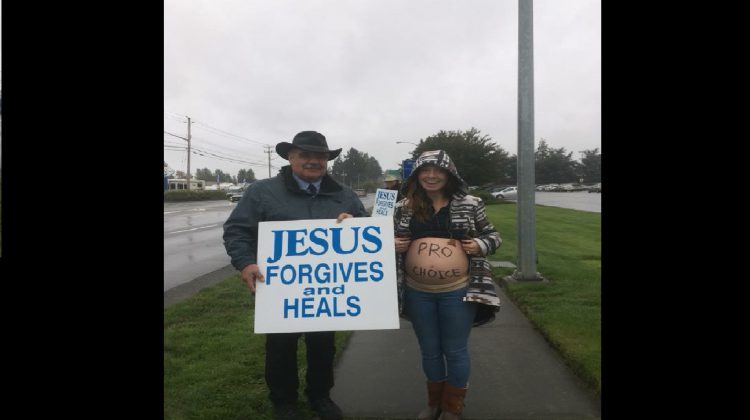 The photo of Larry and Stasia, sourced from Stasia's Facebook page.

COURTENAY, B.C- Larry Jangula is facing criticism after appearing at a pro-life rally in the Comox Valley.

Jangula, who is seeking re-election to the mayor’s seat in Courtenay, was photographed while present at the rally between 26th Street and 29th Street on Sunday, along Cliffe Avenue. Attendees had been holding signs with slogans stating “Abortion Hurts Women” and “Abortion Kills Children”, as well as “Jesus Forgives and Heals”.

According to the Comox Valley Record, the protest was organized by the Campaign Life Coalition, one of over 200 held across Canada as part of their annual Life Chain event.

Jangula was photographed holding one of the “Jesus Forgives and Heals” signs, while standing with Stasia Hasumi, a resident of the Valley who disagreed with the rally-goers. She had written “Pro-Choice” across her belly, and raised her shirt to show the slogan while the photograph was taken.

Hasumi later shared the image to social media, where it caused a large amount of discussion.

The MyComoxValleyNow.com newsroom reached out to Jangula on Monday morning for his thoughts on the photo, and the reaction to his participation in the rally.

“I think that we still have a free country, where people have a right to believe something, or not believe it,” said Jangula.

“I happen to believe in pro-life, and be a pro-life person, and this person that basically sideswiped me on this thing is obviously not. She has the right to her belief, I have the right to mine.”

When asked about the concerns over an elected official participating in the rally, Jangula was defensive.

“Do you not think that people who are elected should stand up for what they believe in? And should basically, if you believe something, that you should then practice it, or do it?” said Jangula.

“In other words, should I not go to church, because some people don’t like people who go to church? I think, as a human being, you need to stand up for who you are. That’s not rubbing it down anyone’s throat, or anybody’s face, it’s simply a matter of being who you are.”

When asked about whether his beliefs influenced his decisions as an elected official, Jangula stated, “of course they do”.

“Do you think that someone who has beliefs in something should leave them at the door?” said Jangula.

“When I take office, or go to my office, all of the things that have formed my beliefs and who I am are the things that I stand for. I’m very public about that. I don’t make any secret about it.”

He went on to mention different issues he has been active in, such as the Maple Pool campground controversy and Habitat for Humanity in the Valley.

“Do you think I should leave all those beliefs behind me when I go to City Hall?”, said Jangula.

As for how his beliefs would impact his decisions as a local elected official, Jangula indicated that abortion was not an area where municipal politicians make decisions.

“If I was a federal cabinet minister, or federal elected official, where you may be ruling on issues such as abortion, and euthanasia, that may have an effect,” said Jangula.

“We don’t do any of that at City Hall. (City Hall) is sewer and water and garbage and police and fire, and sidewalks, and parks, that’s what City Hall is.”

“Quite frankly, I think this lady was being very disingenuous,” said Jangula.

“She came up to me, and said “I would like to have my picture taken with you Mr. Mayor”. She came up, and I didn’t realize that she was wearing this sort of a turtleneck or a t-shirt thing that she pulled up, and she had this stuff written on her stomach. I didn’t see her do that. I think that is very unfair, and very disingenuous on her part.”

He also didn’t think what happened would have an impact on his re-election campaign.

“Those people that disagree with me on this topic probably wouldn’t vote for me anyway, and I don’t see how it would have an effect on the campaign, because once again, we’re not going to be ruling on abortions in the Comox Valley,” said Jangula.

“We already do (have them). We’re not going to rule on whether we have euthanasia, we already do. I simply find it irrelevant. I find this simply to be a red herring, and a very unfair attack, I believe, on people in the Comox Valley who believe in ethics, and morals.”

He said he would go again if given the chance, after having participated in the rally for the past 10 years. Asked for any final thoughts, he stated that it was a “sad day” in the Comox Valley.

“To me this is a very sad day for the Comox Valley, if this is what it’s become, if this is where we’ve ended up, where someone who is an elected person simply can’t have a private opinion, on something, or basically stand for one hour with other people who are like minded and pray. What about all the other people, who have different opinions, that protest? Do you third degree everything that they do?”

The newsroom also reached out to Hasumi for her thoughts on what had happened. She said she had been driving past the rally on Sunday on her way to the grocery store, and felt compelled to act after reading what she said were “hate filled” signs.

“I’ve done a lot of work with women in our community, and I know how hurtful it is to drive past demonstrations like that, so I felt like I couldn’t just drive by,” said Hasumi.

“I got a poster, and was going to write a sign of love on the post, and I just thought that sometimes these groups attempt to create a false dichotomy, like it’s pro-life or anti-life baby killers, and that is certainly not the case, so I felt the need to write “pro-choice” on my belly.”

After making her way to the rally, she was looking down the line to see where she should stand. She said she had wanted to stand there in solidarity, and to remind people that there are others who were not judging for their choices.

“You are the expert of your life,” said Hasumi.

“I was looking for the right sign, and then I recognized Mr. Jangula’s face. I inquired whether he comes here a lot, and whether I could get a picture with him. He consented with getting his picture taken, and he asked me if I wanted the sign in the picture, which of course I did. I wasn’t going there looking for him, I wasn’t really about local electoral politics at that point, but when I saw him I was pretty stunned.”

She said it was bold of Jangula to attend a rally “like that” when seeking election.

“I think it tells voters that Mr. Jangula didn’t know how hurt and angry women would be, seeing him there, or that he has difficulties separating religion and politics,” said Hasumi.

After the photo was taken, she stated that she thanked him and told him that the rally was not what she believed in, and that she was there to exercise her free speech. She then walked down the line.

She told the MyComoxValleyNow.com newsroom that she did not want to “demonize” Jangula with the photo.

“His sign was not nearly as upsetting and offensive as the other signs that were there, but you can tell a lot about somebody depending on the company that they choose to be with,” said Hasumi.

As for her thoughts on Jangula saying she was disingenuous in her actions, Hasumi said he needed to be open to public scrutiny when demonstrating with anti-choice activists in a public space.

“It indicates his morals and his ethics concerning a human rights issue,” said Hasumi.

“It indicates the lens that he brings with him to the decision-making table for our community, so I did ask for his permission to take the photo, I should have shown him my full belly, but the point of it is that he was there, the objective fact is that he was there demonstrating, and as I am told he’s a supporter that is there every year.”

As for the response to the photo, Hasumi stated that she hadn’t expected it to be shared so widely, and was now feeling a little vulnerable. She did say that she would do it again, if given the choice.

“I want women to feel supported, and I think the time is now that women really need to step up and vote for people that are going to support them and not police their bodies,” said Hasumi.

“The message was shared because women feel very strongly about this issue.”

She also encouraged people to get to know their local municipal candidates.

“I stand behind what I did, and I’m prepared to handle the scrutiny for it, just as Mayor Jangula should be,” said Hasumi.

Voters in the Comox Valley will go to the polls on October 20th.