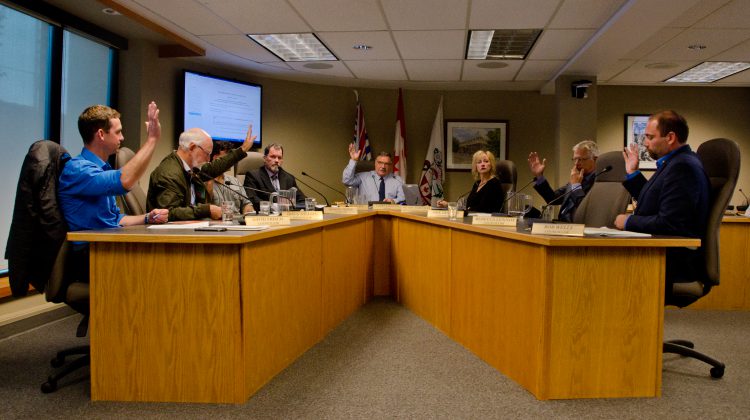 Members of Courtenay city council vote to raise the mayoral salary on the evening of October 1st, 2018. Photo by James Wood/98.9 The Goat/Vista Radio

COURTENAY, B.C- The mayor’s pay is going up in Courtenay.

When the item came up at previous meetings, it was passed without opposition.

Council gave first approval to the raise on August 20th, after a motion from Councillor David Frisch and seconded by Councillor Bob Wells for approval.

In late September, council again gave approval for the rise, though the final approval was needed during Monday’s meeting.

The total difference between the mayor’s current rate of pay and the rise will be $10,493.

While Councillor David Frisch had raised the idea of reducing the rise, citing attention from the public on the matter, that proposal did not find traction around the council table. Councillor Doug Hillian also spoke at length on the topic, during the council discussion.

“My understanding from the staff report that was prepared at the time, and we did in fact debate this, is that we’re in line with other communities of a similar size,” said Hillian.

He believed the rise was not excessive.

“I know that our current mayor is on the go seven days a week, on call,” said Hillian.

“When you’re in the mayor’s chair, you respond to things that happen, whenever they happen, and you’re always a potential target for whatever is going on in the community that people are not happy about. I think it’s worth our while to pay something that compensates fairly for the time spent on the job. I don’t begrudge a nickel of it.”

Hillian mentioned that he knew there was concern about the cost of local government, especially with the number of governments in the Valley.

“People feel that we would be better served by paring it down,” said Hillian.

“My sense is that the actual cost of councillor and mayor’s salary is a relatively small part of the tax puzzle.”

In response to that statement during Hillian’s address, Mayor Larry Jangula stated that the salary was the “smallest part” of the tax puzzle.

“I think that if we’re going to expect somebody to put their life on the line for the city and sit in the mayor’s chair, that we should in fact compensate them fairly,” said Hillian.

Councillor Erik Eriksson agreed with Hillian, and said the increase was “totally appropriate.” Approval was then given without opposition.

The next review of pay for elected officials in Courtenay will be coming in 2022.

More background information on this matter can be found here: https://www.mycomoxvalleynow.com/41943/courtenay-council-gives-final-approval-for-mayoral-salary-increase/