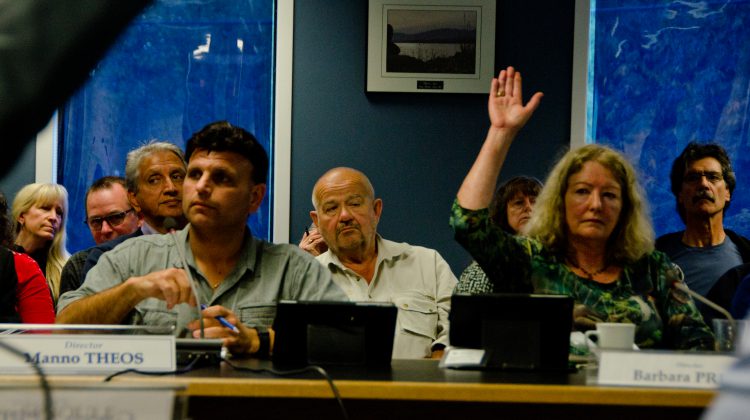 Comox Director Barbara Price holds up her hand to vote in denial of the 3L settlement node application while 3L president Dave Dutcyvich looks around the CVRD boardroom at the votes on October 2nd, 2018. Photo by James Wood/98.9 The Goat/Vista Radio

COURTENAY, B.C- The Comox Valley Regional District has said no to a possible settlement node near the Stotan Falls.

In front of a packed board room on Tuesday afternoon, there was a series of presentations from speakers for and against the settlement node, followed by a presentation from the district’s senior planner Alana Mullaly and Mark Holland, a development consultant hired by 3L Developments Inc. 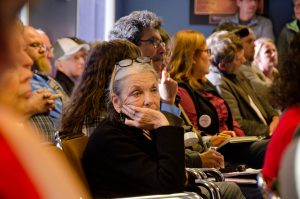 Attendee’s of the CVRD meeting on October 2nd, 2018 listen while the meeting proceeds. Photo by James Wood/98.9 The Goat/Vista Radio

3L has been seeking a settlement node on lands near the Stotan Falls to allow for a housing development.

The district had received a letter from the company asking for an extension in order to prepare new information that would impact a recommendation for denial that came from CVRD staff.

The request is the latest development in an ongoing process, stemming by a development proposal from the company.

The company had been aiming to build 1,000 homes on land in and around the meeting point of the Puntledge and Brown rivers, with private water and wastewater services.

Prior to Tuesday’s meeting, the steering committee for the RGS has met twice, on September 20th and 27th.

During the first stage of the meeting, there were presentations by members of the public. Three of the presenters were in favour, while four were against.

A point of order was also raised after some directors took offense at statements made by Kathleen Pitt, who had been in favour of the 3L development.

During her address, Pitt had accused the CVRD directors of corruption and raised other concerns, which prompted boos from the people gathered at the meeting.

Pitt did finish her address after the point of order was raised. Another speaker, Lisa Christensen, caused an outcry from those in favour of the project after listing out her concerns and fears about environmental damage.

Holland made repeated mention of a desire to provide more information to the board, prior to a decision being made. He also indicated a belief that the district’s growth strategy needed an update due to a lack of new development in the existing growth nodes in the last few years of a hot market. 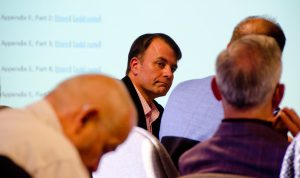 In response to a question from Courtenay Director Erik Eriksson about whether they were looking for an extension or a postponement of first reading, Holland had indicated that they were looking for both, in order to get more information to the CVRD. He later raised the idea of changes to the application itself.

After rounds of questions to both staff and to Holland, the board started their debate, which eventually led to Comox director Barbara Price bringing forward a motion to deny the application as recommended by staff.

The idea found a mixed response around the board table, which began to form into a divide after Area C’s alternate director Curtis Scoville began to outline his views on the matter.

While speaking to the board, Scoville said he sympathized for the applicant and appreciated the information from 3L president Dave Dutcyvich, project manager Kabel Atwall, and Holland. He also said he knew the process could be frustrating, for both large and small projects, while mentioning he understood the desire for a park from the public.

He went on to mention the TAC report, and said it had helped him “wrap his head” around the issue, and encouraged everyone present to read the document, indicated that prior to reading the report he had been inclined to let the current public consultation process keep going.

“It’s very clear to me that that would actually be a very likely wasted effort by the public, staff time, the cost to the public purse, only to come to, very likely, the very same conclusion,” said Scoville.

“If you’re probably going to have to say no, sometimes it’s better to take it on the chin. Easier for me to say, because I’m not running for election, but it’s nonetheless how I feel, so I support the current motion to deny this application.”

After Scoville ended his statement, Courtenay Director Manno Theos brought up a point of order, saying that the applicant had new information and wanted to withdraw their application.

Board chair Bruce Joliffe asked the board if they wanted to allow that information to be presented, and members allowed Holland to speak again and explain.

“We’ve requested the initial discussion be around the postponement of this process, and that is the discussion,” said Holland.

“If the process is to proceed, with actually moving to the denial of the first reading, before we can discuss the option of having to move the postponement, then the risk of the whole process and all the discussion is at stake, and the landowner would wish to withdraw the application entirely if there can’t be an amendment to carry on forward.”

Holland had brought forward that information in a letter, and said he realized the CVRD hadn’t faced a similar situation before. 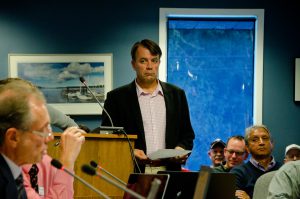 Joliffe said it was highly unusual, and called a recess to consult with district staff.

When Joliffe came back, he apologized for the recess and said there had been “complex processes” at work. The district’s CAO Russel Dyson then told the board members they had a motion in front of them to deny 3L’s application.

“It is the board’s decision,” said Dyson.

In response to questioning from Comox Director Ken Grant, Holland provided some more clarity on 3L’s intentions with the withdrawal. According to Holland, they had wanted to withdraw because they felt the application was underprepared. He also cited concerns about the application being judged by changing standards.

“At some point, they may choose to re-submit with all of the proper documentation, but they don’t to submit an application under one set of requirements, be judged by another, and end up with the whole project dead for a year or more on that,” said Holland.

“That’s the request. Because the three motions were put in front of you all at the same time, and the first motion was moved to basically leap ahead to deny the application, the landowner has instructed me to submit a letter to withdraw that application because of however that vote will go, because we don’t have the chance to extend on that.”

Area B Director Rod Nichol asked staff if 3L would be able to re-apply, and was told that was a possibility, though there would be a change in fees and bylaws, as well as a possible time limit.

Eriksson believed it wasn’t “honourable” to go with the motion, and wanted more information to be available. Grant also raised more concerns about more court actions by 3L.

Eventually, the discussion began to wind up towards a vote, though Nichol did have a final point over concerns about a fair process for the company.

“I don’t think it’s fair to say that there hasn’t been a fair and open process,” said Nichol.

“I was at the Filburg, start to finish, and I answer emails on my computer daily, and I have been very vigilant in not taking a side, telling every person that has emailed me I have to keep an open mind, I cannot indicate which way I will vote. It has annoyed people at times. I have made my mind up, at this meeting, and I wish to vote, so let’s get it done.”

When Joliffe called for a vote, Director’s Larry Jangula, Erik Eriksson, Manno Theos, and Ken Grant were opposed to denial.

The rest of the board voted in favour, with Grant asking for the votes to be recorded.

Holland thanked the board and staff for their time after the vote was finished.