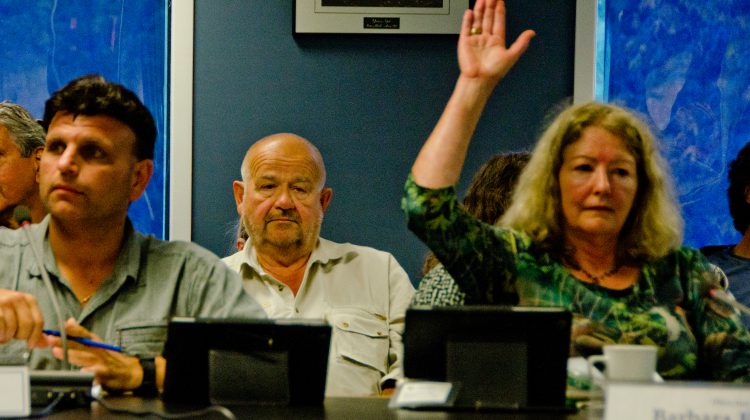 Comox Director Barbara Price holds up her hand to vote in denial of the 3L settlement node application while 3L president Dave Dutcyvich looks ahead in the CVRD boardroom at the votes on October 2nd, 2018. Photo by James Wood/98.9 The Goat/Vista Radio

COURTENAY, B.C- The fate of a project to build houses near the Stotan Falls appears to be sealed, for now.

Last night, the Comox Valley Regional District (CVRD) said no to a possible settlement node near the falls, which was being sought by 3L Developments Inc.

The company had been aiming to build 1,000 homes on land in and around the meeting point of the Puntledge and Brown rivers, with private water and wastewater services.

The CVRD consistently disagreed with the company’s plans, which led to a court battle.

The district had started a consultation process for the possible addition of the node, which led to a chance for first reading last night.

After a staff report recommended denial, the district’s board of directors voted six to four in favour, with Director’s Larry Jangula, Erik Eriksson, Manno Theos, and Ken Grant opposed.

Reached this morning, the CVRD’s Senior Manager of Planning and Protective Services Alana Mullaly said that the denial meant the end of public consultation and staff review, and that the application was “essentially closed”.

As for what would happen if the company re-applied, Mullaly said that any landowner would need to go through the same steps if they wanted to amend the RGS. The board would need to agree to start an amendment, decide on a standard or minor process, and adopt a consultation plan.

“We would repeat the same steps for any RGS amendment,” said Mullaly.

This process may change, however, due to an amendment to the RGS that would bar third parties from applying to the district board directly. Instead, applicants would need to go through their municipal councils or electoral area services committee, who would then bring the amendment forward to the board to consider.

That change is currently at second reading, and has been sent out to the Valley’s local governments for consideration.

“We would expect to get all the comments back from the affected local governments within 60 days, if that happens, our board would be in a position in December to consider adoption of that bylaw,” said Mullaly.

As for what could happen with any re-application by 3L, Mullaly indicated she didn’t know what the company was going to do with their lands.

“They could certainly come forward with an application to re-zone the land, in accordance with the RGS and the rural official community plan (OCP),” said Mullaly.

“For example, our OCP says that within the rural settlement area, lot sizes between four and twenty hectares can be considered by the board. Their zoning on the land is 20 hectare minimum for subdivision. So they could come forward to the rural directors with a re-zoning proposal to go down to as small as four hectares, or 10 acres, for subdivision.”

Mullally indicated that could happen now.

“In terms of whether or not they will return with an RGS amendment application, I wouldn’t want to speculate on that at this point.”

She said she was not aware of any communication from the company as of Wednesday morning.

When asked about concerns of further court action by the company, which were raised by Director Ken Grant during the Tuesday meeting, Mullaly said she thought the board had been “quite careful” in their process steps.

“I think as we saw last night, that the board has followed it’s consultation plan, which was a requirement of the act to adopt, so last night was just one more process step which they completed,” said Mullaly.

“They have delivered the process that is required of them.”

She also said private landowners had no obligation to open up their lands for public use, in response to concerns over Stotan Falls being “fenced off” or tolls being placed on Duncan Bay Main.

“So any private owner, there is absolutely no obligation, or expectation, that they would be opening up their lands for public use, recreation or otherwise.”

“They can close access to their property, provided that they are not encroaching on anyone else’s property, or public land,” said Mullaly.

“Certainly, that is within their purview.”

She closed by thanking the public for their engagement in the consultation process.

The MyComoxValleyNow.com newsroom has reached out to the company for comment.