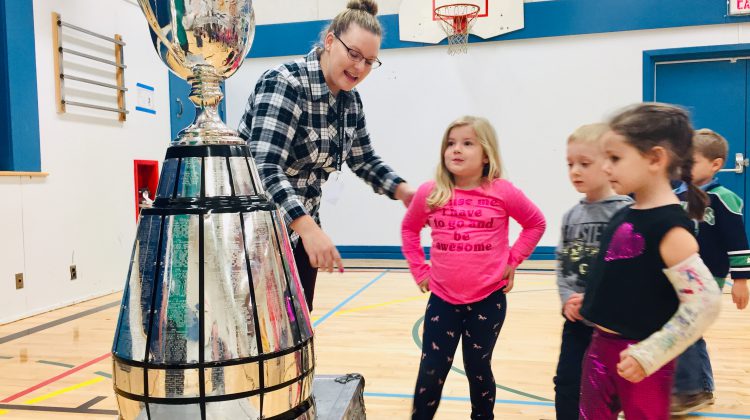 Kindergarten students at Airport Elementary had an up close look at the Grey Cup this morning. Photo by Troy Landreville/98.9 The Goat/Vista Radio

The 110-year-old trophy, awarded every November to the Canadian Football League playoff champions, arrived in Comox courtesy of sponsorship from the charitable organization, Canada Company.

Students, staff, and Defence Team Partners of 19 Wing and CFB Comox listened to official handler Jeff McWhinney share stories of the trophy’s military links as well as the history of the cup.

McWhinney is the keeper of the cup, meaning he is tasked with caring for the coveted silver trophy.

He has a family connection to the cup, and the CFL. His father’s name is engraved on it, and being the trophy’s keeper is a way for him to honour his dad.

The late Glen McWhinney was a member of the 1954 CFL champion Edmonton Eskimos.

“It’s a great way to pay tribute in honour of a great man,” McWhinney said, regarding his job as the Grey Cup’s guardian.

McWhinney said the link between the Grey Cup and Canada’s military is unbreakable.

“When you look at people who have competed or fought for our country, is very important; when you lose 65 percent of that barrel (on the Grey Cup) which has 3,743 names on it, a lot of those guys went to war for us,” he said. “It is very important to me to make sure those freedoms and the ideals they fought for, that I express. I need to be the voice of those guys who are no longer here.”

George Salamis, president of the BC Chapter of Canada Company, facilitated the visit. He said it was a pleasure to bring the Grey Cup to Airport Elementary, especially considering that the parents of many of the students are connected to the military in some fashion.

“Canada Company does this sort of thing, so we support our troops in any way we can. Our mission is to raise awareness for the great things that our military men and women do and this is just one example of that,” Salamis said.

He called the Grey Cup a piece of Canadian history, adding that the military has always had a “phenomenal history” with the CFL and football.

“This brings the two together and it’s a great way to basically promote both football in Canada and the military at the same time,” he said.

After its visit to the Comox Valley, the Grey Cup is heading back to the Canadian Sports Hall of Fame in Winnipeg.