Intersection at 5th and Fitzgerald will reopen before the weekend 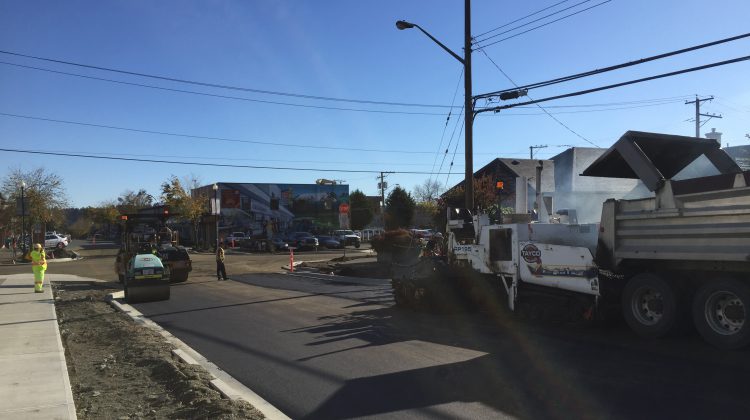 Photo courtesy of City of Courtenay

A busy intersection in downtown Courtenay is opening in time for the Thanksgiving weekend.

The reopening of the intersection at 5th Street and Fitzgerald Avenue is scheduled to take place by the end of today, along with the block between Fitzgerald and Harmston Avenues.

Upgrades to 5th Street are progressing each day as the Complete Street Pilot Project heads into the home stretch.

The first layer of asphalt has been installed, with a second layer to be installed in the near future.

Periodic single-lane traffic or short closures may occur later in the month to finalize sidewalks and landscaping.

The City of Courteny is advising drivers to be aware of bumps at the transitions between the old and new asphalt. These bumps will remain until the second layer of asphalt is installed.

The portion of 5th Street west of Harmston Avenue may look ready for reopening, however there will still be construction activity underway in the area.

For the protection of both work crews and the public, the road will be reopened to all modes of transportation when it has been deemed safe to do so for all concerned.

Over the coming weeks, residents can expect to see the sidewalks completed and rain gardens and landscaping installed, followed by bike lanes, signage and road markings.

Next week, the new rain gardens will start to take shape, according to a City of Courtenay release.

Rain gardens receive the water that flows off the sidewalks, bike lanes and streets, reducing the flow of water entering the City’s stormwater network.  The rainwater is then slowly and naturally reabsorbed into the ground.

“With the addition of plants where asphalt used to lay, the gardens also add visual appeal to the area, as well as create a physical barrier between vehicle traffic and new bike lanes,” notes the release.

The protected bike lanes will also take shape once the new asphalt is in place.

The lanes are designed to provide safe and comfortable connections to downtown, area schools, and population transportation hubs, including bus routes.

One hundred percent of eligible project costs up to $3.253 million are covered through the federal Gas Tax Fund, under the Strategic Priorities Fund – Local Roads, Bridges and Active Transportation category.

In addition to surface upgrades, the project has replaced all below-ground infrastructure on this 500-metre long section of 5th Street.