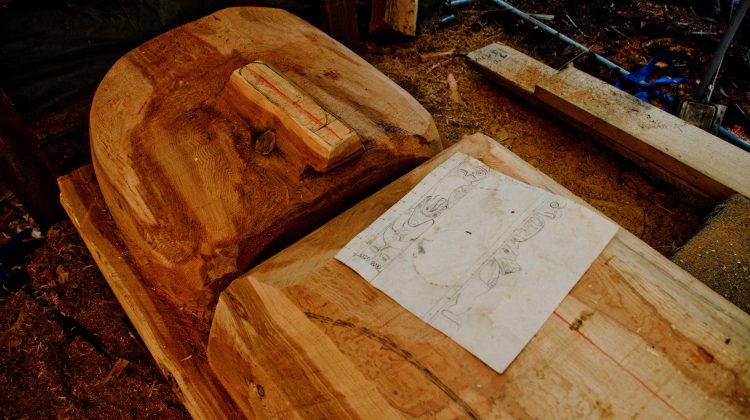 The rough shape of the top of a totem pole meant for Mount Washington is pictured on October 4th, 2018. Photo by James Wood/98.9 The Goat/Vista Radio

That’s according to Randy Frank, a K’ómoks First Nation (KFN) carver. He and Karver Everson are working on a project that could see a pole at Mount Washington and the Courtenay Airpark, part of a network that KFN is putting together to mark their traditional territories.

Frank has been working on the pole meant for the mountain, roughing out a thunderbird for the top and a grizzly bear for the bottom. The block of cedar is currently at his workspace, close to the KFN band office, and the head of the thunderbird can be seen taking shape. 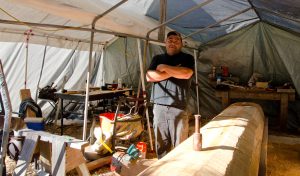 Randy Frank is pictured in his work space on October 4th, 2018. Photo by James Wood/98.9 The Goat/Vista Radio

Frank told the MyComoxValleyNow.com newsroom that the process of choosing what to put on the pole involved research for what was poles in the area in earlier years. The search went through local museums and logbooks, in order to figure out what past traditional designs looked like.

While he said the thunderbird and the bear were not necessarily linked to Mount Washington specifically, he did provide more insight on why he chose the combination.

“The Thunderbird traditionally comes from the Beaufort mountain range, for our people, so being on a mountain, I figured the thunderbird would represent that very well, and then the grizzly bear being on the bottom, you know there’s lots of grizzly bears around here and on the mountain, we have grizzly bears on the Island now,” said Frank.

“I think it’s kind of fitting that the two of them tie in together, and that it’s going to be on the mountain.”

He didn’t have an exact timeline for when the pole would be heading up the mountain, though he hoped it would be before snow started falling in earnest.

He may end up carving the back of the pole, though if it goes inside the lodge against a wall he plans to leave the other side blank.

Frank said that KFN elders decide where to place poles, and Tree Island is in consideration.

“It’s a ten year program, that the band started, so we’re going to try to put poles up from the edge of our territory to the other edge, which is right from Englishman River to Sayward,” said Frank.

He anticipates that the pole will be finished in the next two weeks, and encouraged residents of the Valley to come out and look at the work in progress.