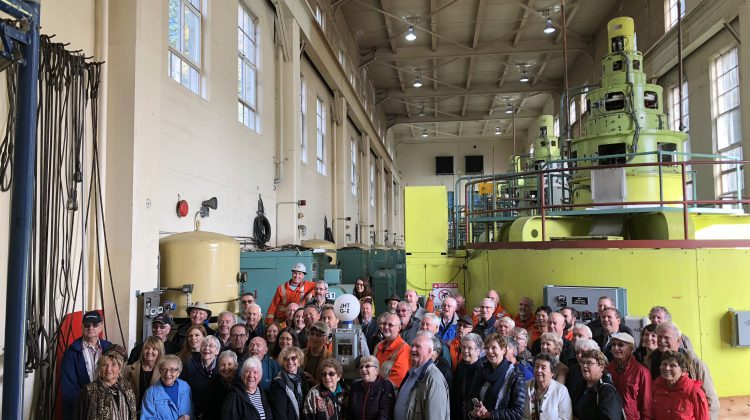 BC Hydro current and retired employees and Power Pioneers gather around the switch that turns off the generators at the John Hart dam. Photo by Twila Amato/Vista Radio.

Greg Remfert, a sub foreman for B.C. Hydro, shut off one of the two units after his name was drawn via lottery. He said he felt lucky his name was picked out. Having been with B.C. Hydro for 28 years, he’d seen the dam go through a few changes.

“I’ve spent a lot of hours here… it’s kind of the end of an era for us, and now we have the new one (powerhouse) to look forward to so it’s good,” Remfert said. he added that because he’s been responsible for maintaining the dam, it felt like his own child at times. “It gets ingrained in you. We look after the whole system and yeah, you have some pride into it.”

Fawn Holland turned off the second unit today. Chris O’Riley, B.C. Hydro’s President and Chief Operating Officer was scheduled to turn it off but was unable to make it.

Those in attendance were a mix of current and past employees. According to Stephen Watson, B.C. Hydro’s spokesman, it was a big day for the company, especially for the attendees who have taken care of the dam and seen it develop throughout the years.

“There’s a lot of time and effort, people trying to keep the system safe and reliable and considering the community as we operate. I’ve seen people who’ve retired and come here a bit misty-eyed. It’s basically the end of an old legacy and the start of a new legacy, the start of this new facility. It’s better for B.C. Hydro, it’s better for the community,” Watson said.

The John Hart generators began construction in 1946, starting operation in 1947. For the past 71 years, the dam has served Campbell River and the surrounding communities. Issues began cropping up from 2000-2004, which Watson called “health issues.” The aging dam sometimes had to be shut off due to lightning strikes, and a weakening ability to withstand seismic activity.

Construction for the replacement began in 2014, with underground rock removals completed in 2017. Watson said the new underground powerhouse is on track to start operation in a few weeks’ time. He also said that while the new turbine is now in its final testing, there’s still a small chance that one of the old generators might be turned on again to service Campbell River, but will be shut off once the new powerhouse is fully operational.

The replacement underground powerhouse will generate 10% more energy with the same amount of water flow the old generator used, thanks to efficient equipment. Watson said the new generator will be safer, more reliable, and will better protect downstream fish habitat.