Courtenay Council candidate frustrated by having her election signs defaced 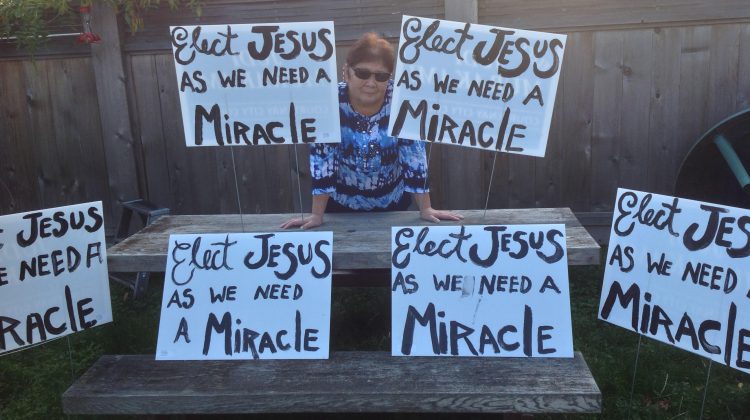 COURTENAY, B.C. – Judi Murakami is at a loss as to why someone would deface her municipal election signs.

She is taking a run for a City of Courtenay councillor’s seat in the upcoming civic election taking place Oct. 20.

Like other candidates, Murakami has election signs erected around Courtenay, but for reasons unknown to her, someone has scrawled  ‘Elect Jesus as we need a Miracle’ on the back of many of her placards.

Murakami is frustrated that she has to remove each of the vandalized signs from the city’s landscape.

“When I take away those signs, it’s less basic advertising,” she said. “And they’re not cheap, unfortunately.”

One theory behind the vandalism is the back of her signs are white, giving the vandal a blank canvas to work with.

But on her way home today after picking up more vandalized signs, Murakami noticed the back of other candidates’ signs are also white.

Murakami believes it’s one person defacing her signs, because the handwriting is identical on the back of all of the ones that have been targeted.

She said she is running on a standard platform of advocating for seniors, arts as an economic pillar, and more green space – so nothing controversial or out of the ordinary.

“I can’t see how that’s offensive to anybody,” Murakami said.

Murakami, who has lived in the Comox Valley for a decade, was urged to run by people who believe she is both active and knowledgeable about the community and its many organizations.

“I’ve got the background, I’ve got the skills, and I thought, ‘fine, this is another way for me to serve,'” she said.