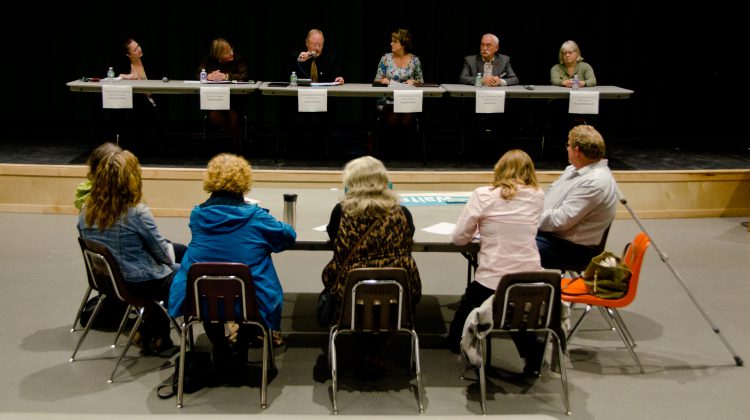 SD71 trustee candidates speak during their forum on the evening of October 10th, 2018 at GP Vanier Secondary School. Photo by James Wood/98.9 The Goat/Vista Radio

COURTENAY, B.C- Candidates for the contested seats on the Comox Valley schoolboard met on Wednesday night.

While Courtenay candidates Janice Caton and Kathleen Hawksby, Cumberland candidate Sheila Jane Howe, and Area A candidate Sheila McDonnell have all been acclaimed, there are still a number of races for schoolboard seats in the Valley, which were on display at the multi-purpose room at Georges P. Vanier Secondary School throughout the evening.

Randi Baldwin and Tonia Frawley are competing for the Comox seat, while Michelle Waite and James Derry are in the running for Area B.

Terence Purden had been running against current trustee Ian Hargreaves for the Area C seat, but announced he would no longer be actively campaigning prior to the start of the forum.

McDonnell participated in the forum, though Caton, Hawksby, and Howe were not on the panel. Caton later arrived to watch from the audience.

Candidates touched on multiple topics during the evening, which consisted of a set of formal questions posed with a time limit to the assembled candidates, followed by group discussions with the audience.

The MyComoxValleyNow.com newsroom has broken down the formal question section into brief notes.

McDonnell said it was important that she would have confidence in the board process, and that there is more than one way to find a successful path. She also said she had been in that situation, but that kind of outcome is “never the end of it”, with more work to go on.

If she was truly unable to accept a board decision, she would resign, but she “hasn’t gotten there” and has confidence in the board process.

Derry said that boards have to compromise and realize in the end that decisions have to be in the best interest of students. He would also explain “to the best of his abilities” why a board decision came out the way it did, and how it will work in the long run.

Waite stated it depended on the issue, with some being more critical than others.

She would want a goo sense of what people wanted, and hoped that stakeholders would be consulted when voting so that board could have a good sense of what they like.

If that didn’t take place, she would want to see where she was “way off the mark”, and check if stakeholders felt the same way she did, while encouraging them to advocate “the way they need to”.

As for Baldwin, she said that she had not been on a schoolboard, but “you still have to go with the majority vote”. She believes that trustees need to do their own research before something comes to the board, and she would want to know what “everybody wants”, know the issue, and communicate with stakeholders.

Frawley said there “is no I in team” and you have to support your team, in response to the question. She also mentioned her experience with school closure at Brooklyn Elementary, referencing shock she had felt when a trustee decision did not go the way she had hoped but still moving ahead.

The second question was on how they, as a trustee, would make sure that policies and implementations of those policies would be best support staff and students.

The first person to answer was Waite. While she said she had not been a trustee, she hoped that there would be consultation before policy gets passed, and tweaking if needed. As for how those policies would be implemented, she said that would be up to schoolboard staff. Trustees would only be involved if implementation was not “done properly”.

Derry had a similar answer, while re-iterating that implementation is carried out by schoolboard staff.

McDonnell said she loved policies, both their development and looking back at older policies. She said the board had been through “a lot” when it came to policy, with examples such as the board needing to sign off on each field trip and other “vast areas” with no board input.

She believed the current board policies are enabling, allowing people “to do what they need to do” with accountability. The policy development process is also “a lot of fun”.

Frawley said she had been fortunate to be on a policy committee, which had been an “interesting process”, mentioning the debate of single words within policies. She maintained that consultation, communication, and input are best, and where relationships with partner groups can be very important.

Baldwin said that if implementation was going to be done, those doing it needed to talk to the people being affected, mentioning a desire to go to individual schools and talk to students. She wanted to have a dialogue between students, staff, and the trustee, and develop policy very carefully. She stated that decisions have repercussions, and trustees needed to be careful how they make their decisions.

Hargreaves was “delighted” by the question, and said he knew McDonnel had a real passion for policy. He went on to say that students are at the heart of all policies, while policies are also meant to align with the board’s strategic plan.

The last formal question was on accountability. The candidates were asked what accountability meant to them, and who, as a trustee, they felt they were accountable to.

Hargreaves said he was accountable to his constituents, the government, parent groups, students, and colleagues, with his actions judged by other board members as well.

Baldwin agreed with Hargreaves, and thought had had “said it all”. She added that she believed trustees are accountable to all the stakeholders, parents, teachers, support staff, and taxpayers, even those without kids in the school system

Frawley agreed as well, and said they had to be accountable to themselves.

McDonnel said she felt accountable to the community and to the children, and that education had sometimes done harm. She believed that the trustees needed to make sure they always support extra help for children in order to launch them into a world that is “extremely challenging”, and always be mindful of creating a tone that was about the kids.

Derry said that students are the core of accountability, and that trustees were also accountable to the taxpayers.

Waite said that accountability meant to “own what you’re doing”, and that trustees were accountable to the Ministry of Education, most of all to the students, and children in all spectrums.

After that question, the rest of the evening broke into small groups.

All of the candidates present support British Columbia’s sexual orientation and gender identity (SOGI) teaching materials, when asked by the MyComoxValleyNow.com newsroom.