Purden will withdraw if elected to Area C schoolboard seat 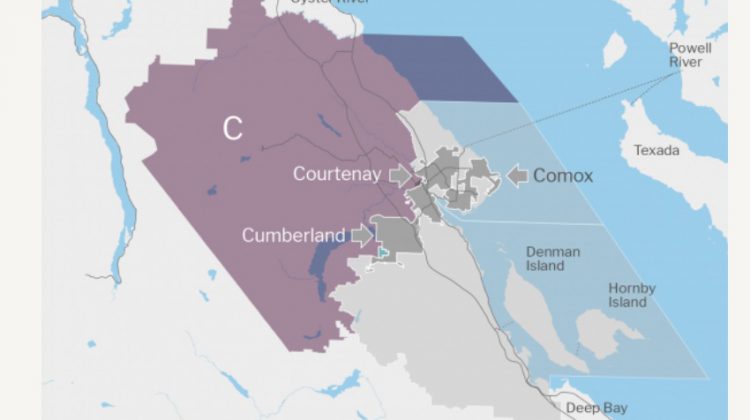 CVRD Area C is shown on the district's website.

BLACK CREEK, B.C- Terence Purden will not accept a seat on the Comox Valley’s schoolboard.

Purden had tossed his name in the race for the board seat for Area C in the Comox Valley Regional District, facing off against current board member Ian Hargreaves.

He had also been listed as one of multiple candidates opposed to British Columbia’s sexual orientation and gender identity (SOGI) teaching materials, one of 38 running across the province.

On Wednesday evening, trustee candidates for the Comox Valley’s school district met for a forum at GP Vanier. Prior to the start of the forum, a brief message from Purden was read out to the attendees as Purden was not present.

According to the statement, Purden has decided that the other candidate (Hargreaves) is the “best man to represent Area C”. He expressed regret that he was unable to remove his name from the ballot, and said he would not be actively running and was “not prepared to handle the role of trustee” in School District 71.

His name will be staying on the ballot, because it’s too late to be removed.

Reached for comment, Purden indicated he does not expect to be elected.

“I think I’ll go out and buy a bunch of lottery tickets (if elected), because I think the odds are very slim,” said Purden.

“The gentleman running in Area C has done a great job in the past and he’ll have no trouble winning handily. I haven’t gone and done any signs or door knocking, as far as that type of thing.”

Purden said he had been enthusiastic at the outset, but got back from a trip after the deadline to pull out of the schoolboard race. After looking at his opposition and consulting with his neighbours, who are retired teachers, he decided not to go ahead with campaigning.

He said his neighbours had told him Hargreaves would do a “great job.”

“I used that as my final decision making, and I thought no, I should not be running in this race,” said Purden.

“I’m hoping that nobody is offended.”

Purden also said he would withdraw if elected.

As for his listed opposition to SOGI, Purden indicated he didn’t actually plan on opposing it.

“I would say that (his name) that got on there by mistake,” said Purden.

“I did go to a meeting of people that were talking about that, but I never wanted to be a part of their advertising campaign. I’m not against them, I’m not for them. If I was running as a candidate, I wouldn’t be backing the dispute about SOGI. But certainly, I would have an interest and things to say about it at a later date, but certainly not now.”