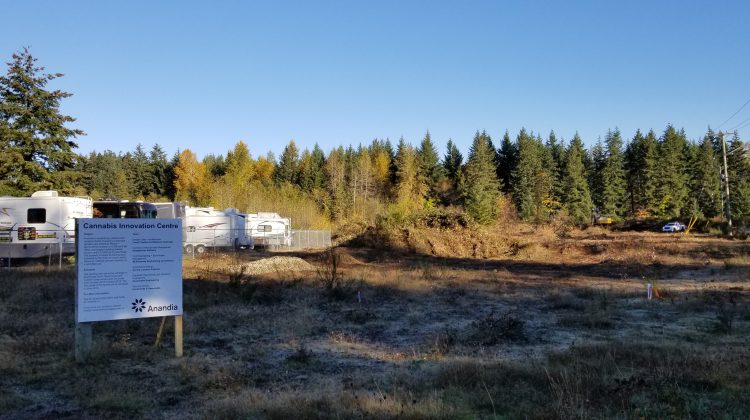 The new facility is being built on land off of Knight Road in Comox. Photo by Justin Goulet/Vista Radio

COMOX, B.C. – Just in time for the legalization of recreation cannabis, a new operation has broken ground in Comox.

Anandia, a subsidiary of Aurora Cannabis Inc. is behind a new “Cannabis Innovation Centre” just off of Knight Road, near the Comox Valley Airport.

“Earlier this year, we heard that there was a company interested in setting up a research and development facility at the property next to the traffic circle in Comox on Knight Road,” said Comox mayor Paul Ives.

“They’re a couple of local people who are based in Vancouver now, and are moving their operations here to the Comox area because of the relatively affordable land and the opportunity to construct and expand a research and development facility.”

A sign located on the property, displaying some of the project details. Photo by Justin Goulet/Vista Radio

Anandia focuses on the science of cannabis with two sites in Vancouver. The company has 42 staff members, including 31 scientists, according to Comox project coordinator Nick Page.

The company works on cannabis testing, to ensure the safety of consumers, and breeding of new cultivars.

The Comox project will focus on Anandia’s plant breeding work

The first phase will consist of a 21,000 square foot greenhouse and a 10,500 header house that will include offices, lab space, meeting rooms and electrical gear to power the greenhouse.

According to the company, future phases will “likely include more greenhouses, as well as support buildings, labs and offices.

The site will be fully fenced and gated and monitored as per Health Canada’s security regulations.

Heatherbrae Builders out of Nanaimo is the general contractor with sub-contractors from the Comox Valley and other parts of Vancouver Island.

Ives said the town has been in contact with Anandia in regards to the project.

“Council was asked just to approve the stormwater management process that they’re going to employ. Otherwise, it was already pre-zoned by council of a previous time to allow for that kind of use, essentially a light industrial use,” he said.

He said the facility would have a positive impact on Comox, and the entire Valley.

“We understand that there could be as many as 30 relatively high-paying jobs with people who have PHDs and other qualifications doing the research. So they’ll be moving here, buying houses and contributing to the local economy,” he explained.

“When you combine that with the fixed wing search and rescue facility, which is another 70 high-paying jobs, that building is under construction at the base, so that’s a significant boost for the local economy.”

As for concerns about smell in the area, the company said that they are going to use two types of filters to remove odour from the air.

The first phase of the project is slated to be completed by June 2019.