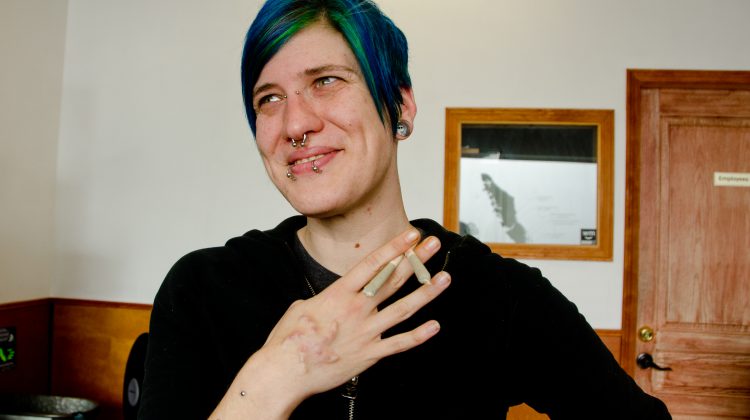 Jen. a resident of Courtenay, holds up the two joints she received during Leaf Compassion's give away on October 17th, 2018. Photo by James Wood/98.9 The Goat/Vista Radio

Leaf Compassion, along 4th Street, marked the official legalization of marijuana by handing out free joints to enthusiastic store visitors, along with information about the plant’s various uses.

Store receptionist Nathan Manuel was drawing the joints from a large jar on the storefront’s main desk. No cannabis was being sold from the site, which is designated as a “cannabis information centre” according to Manuel. 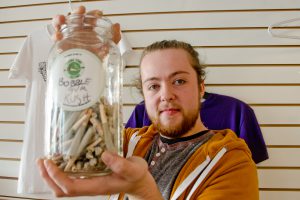 Nathan Manuel holds up the jar of joints during Leaf Compassion’s give away on October 17th, 2018. Photo by James Wood/98.9 The Goat/Vista Radio

CBD oil and chocolates that look like marijuana were on sale, and the store’s owner has indicated that they’re hoping to be licensed by the city in 2019.

The store was raided twice by police in 2017 after opening without a license.

“I wasn’t a part of the raids that went on, but I heard they were just awful,” said Manuel.

He said around 60 to 70 people had already come by the store before noon, all of them “super pumped”.

The jar of joints was around half-full by the same time.

More information on cannabis legalization and the North Island area can be found here: https://www.mycomoxvalleynow.com/43316/north-island-communities-lay-out-public-pot-smoking-rules/