Driver in crash that sent boat into Courtenay home given tickets, car impounded 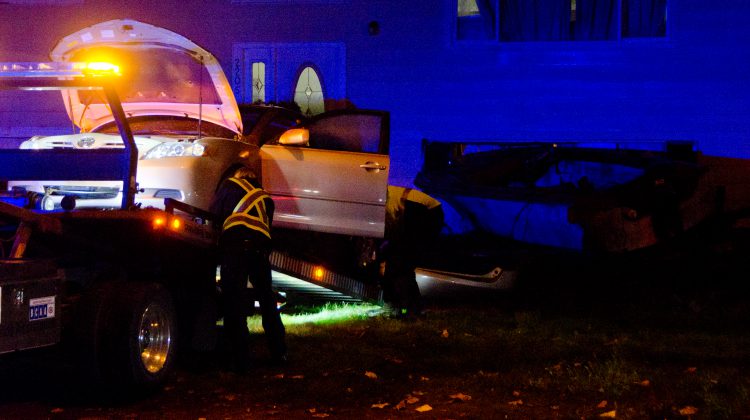 A car is removed from the scene of a crash that send a boat into a home in southwest Courtenay on October 17th, 2018. Photo by James Wood/98.9 The Goat/Vista Radio

COURTENAY, B.C- The driver that left a boat lodged in a southwest Courtenay home last night will not face criminal charges.

On Wednesday night, around 11:15 p.m., officers from the Comox Valley RCMP went to a crash near the intersection of Fitzgerald Avenue and 21st Street.

A car had left the road, hit a power pole, and hit a parked boat, which sent the boat through a window and into the side of the house it was parked in front of.

“When police attended, an impaired driving investigation was launched,” read a police statement from the incident.

“The investigator determined that the driver had consumed alcohol before driving. A 90-day Immediate Roadside Prohibition was served to the driver, several violation tickets were issued and the vehicle was impounded for 30 days.”

No criminal charges were laid. The rules governing roadside prohibitions can be found here: https://www2.gov.bc.ca/assets/gov/driving-and-transportation/driving/publications/factsheet-immediate-roadside-prohibition.pdf

The young male driver also did not have a valid license, which resulted in a ticket.