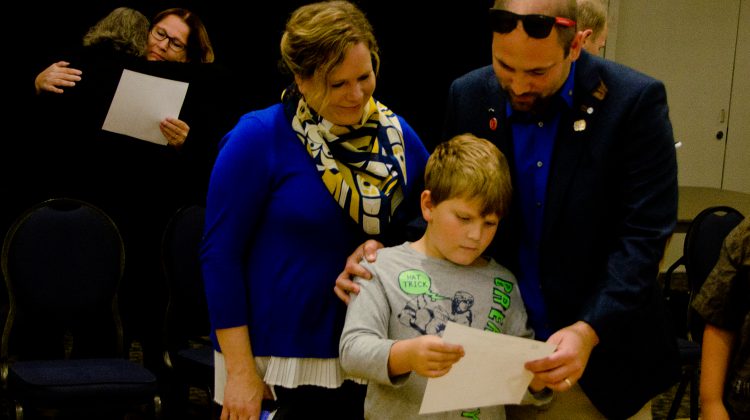 Wells looks at the unofficial election results with his wife and son in Courtenay's Florence Filberg Centre on October 20th, 2018. Photo by James Wood/98.9 The Goat/Vista Radio

COURTENAY, B.C. – The election is finished in Courtenay.

Bob Wells has been elected mayor in Courtenay, with an unofficial vote total of 2950.

Incumbent mayor Larry Jangula came in second, with an unofficial count of 2512.

The following council candidates also made it in.

“We’ve got a lot of work ahead of us, but I think we are going to build that culture of collaboration and cooperation so that we can actually start getting things done, really bringing Courtenay into a modern city,” Wells told MyComoxValleyNow.com following the release of the unofficial results.

He said he was a bit surprised by the number of votes he received.

“I was basically focusing on the fact that I’m the underdog right from the beginning, you know, Larry’s an incumbent, and Erik Eriksson was also running, and Harold Long,” he said.

“I want to thank all of those guys and their families and campaign teams for the time and energy they put into it, but at the end of the day I think it was a pretty resounding result. And not just for myself, but for the folks that got elected. I think that really speaks to what people are expecting and what they want in the community.”

Reached for comment, Jangula indicated he didn’t know if he would run for office in future.

“I have no idea what I may or may not do,” said Jangula.

“Obviously, I’m going to sit down tonight, and the next week or two, and analyze what I’m going to do. The voters have cast their vote, and the public has spoken, and we respect that.”

As for whether or not he expected the result, Jangula said he had been hopeful.

“It was very positive,” said Jangula.

“It’s never over till it’s over, I’ve always had that theory and that philosophy. Was I expecting that? I wasn’t expecting anything. Obviously, when you go to listen to the results, you’re apprehensive, and listening to what’s going to happen.”