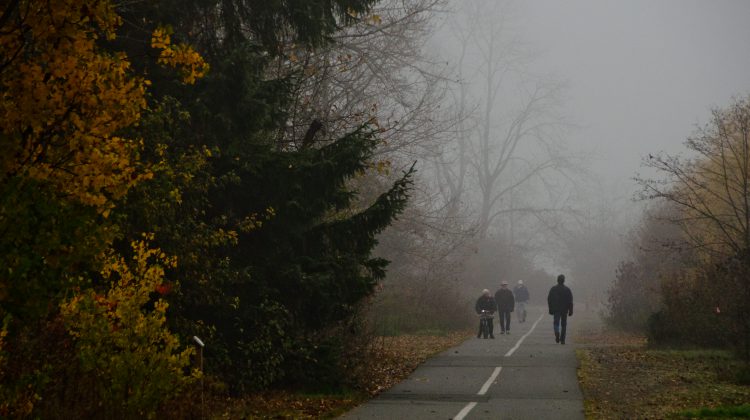 Walkers head through fog at the Courtenay Airpark as the mist rolls off the water on the morning of Tuesday, October 23rd 2018. Photo by James Wood/98.9 The Goat/Vista Radio

VANCOUVER ISLAND, B.C. – Fog is covering parts of northern Vancouver Island this morning, which has resulted in some flight cancellations.

According to a notice from the Comox Valley Airport (YQQ) web schedule, the 6:55 a.m. flight to Vancouver (YVR) was delayed by weather, while the 9:40 a.m. to YVR was cancelled.

“It’s (the fog) been going off and on now for about a week. We’ve had some seasonably poor visibility due to marine fog that’s been rolling in and out,” said YQQ’s CEO Fred Bigelow.

“The forecast is calling for it to improve and we should have things in full operation by about one o’clock today. Forecasts though aren’t perfect, especially with small changes, wind direction and temperature can vastly effect … it can improve very quickly or it can go back down.”

He said the airport is hopeful that the visibility will improve by early afternoon.

“Nothing’s moving right now (as of 10:00 a.m.), but we caution passengers to stay tight with their airline, they’ll have the latest and best news in terms of delays and cancellations to make sure the passengers are taken care of the best they can be under these very difficult visibilities,” he said.

“Once you get below a quarter mile, nothing will really be moving on this airfield.”

At the Campbell River Airport, the 9:15 a.m. Pacific Coastal Airlines flight to Vancouver was cancelled, as was the 9:30 a.m. Central Mountain Air flight to YVR.

A request for comment has been sent to the Campbell River Airport.

According to Pacific Coastal Airlines’ website, the 6:30 a.m. flight out of Port Hardy to Vancouver’s south terminal was delayed.