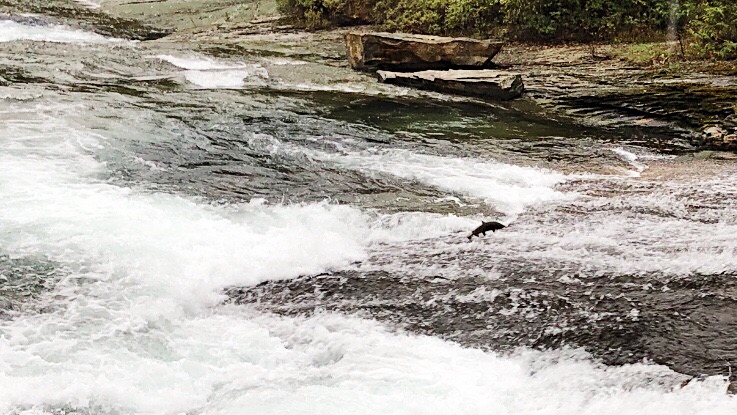 A salmon jumps near Nymph Falls on October 8th, 2018. Photo by James Wood/98.9 The Goat/Vista Radio

“Things are looking pretty good for Chinook and Coho, some of the best returns within eight years,” Reutenberg reported.

“The pink return was very low, (and the) Summer Chinook return was also quite low. The chum run has only just started so I don’t have a strong grasp on what the return is yet.”

According to the Pacific Salmon Commission, spawning escapement is defined as the number of fish arriving at a natal stream or river to spawn.

The Department of Fisheries and Oceans provides weekly updates on chum returns in the Strait of Georgia.

The Puntledge, (Big) Qualicum and Little Qualicum rivers are combined into the mid-Vancouver island chum aggregate for management purposes.

Escapements are estimated by the Puntledge River Hatchery. Estimates are derived from a combination of assessment methods including hatchery counts, above fence bypass counts and below fence swim surveys.

A swim survey was conducted on October 17, and the preliminary estimate from this count is 7,000.

Escapements are estimated by the Big Qualicum Hatchery. These estimates are a combination of daily fence counts into the spawning channel and a below fence visual estimate.

The Big Qualicum interim escapement target is 85,000. The hatchery reported 32 chum above the fence on October 17 and none observed below the fence.

Escapement estimates provided by the Little Qualicum Hatchery and Stock Assessment. These estimates are a combination of fence counts into the spawning channel and a below fence estimate from swim counts.

A swim survey on October 16 observed 563 chum in Little Qualicum, of which 10 percent were spawning in the river. The Little Qualicum hatchery will have the chum channel operational early next week.