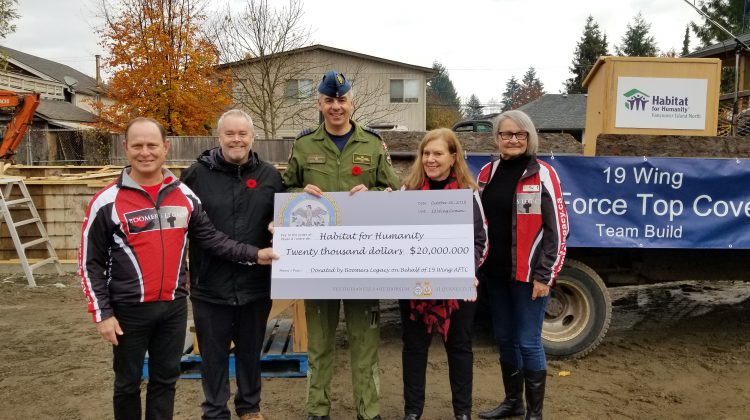 COURTENAY, B.C. – Habitat for Humanity’s build in Courtenay has reached another milestone.

The concrete was poured for the foundation of four new homes at the Lake Trail Road build site.

“We have a ten home subdivision that we’re building and today (we poured) literally forty per cent of that subdivision in foundation,” said Pat McKenna, the Executive Director of Habitat for Humanity Vancouver Island North.

“The biggest part of it is that (personnel from) 19 Wing Comox are going to come out and volunteer and build a whole duplex for the community, between now and July of 2019.”

The cause helps raise funds so soldiers can take part in charitable efforts in their community, like assisting with the Habitat for Humanity build.

“It means so much (the donation). For them to give back to the community in the way that they do every year, and to choose Habitat for Humanity, we’re so honoured,” McKenna said.

He noted that the community support for the Courtenay build has been fantastic, and they have welcomed many volunteers.

However, he said they’re always looking for extra help.

“If you want to come down and volunteer, please do. It’s been awesome, and we’re trying to keep ‘the things in people’s way’ at a minimum because a construction project can be pretty complex, but I think we’re doing a good job and it’s just been fabulous, the engagement in the community,” he added.

“We love volunteers in all ways, shapes and forms. It doesn’t have to be on the hammer. It can be through site hosting, or through fundraising. This project is $2.2 million and we’re not quite there yet. If people want to donate, that’s fabulous as well.”

McKenna said Habitat is creating a land strategy so they can continue building. The first sets of homes on Lake Trail are anticipated to be finished by October 2019.

In total, there will be ten homes on the site, and McKenna said he expects work to be done by 2020.

“By 2019 we want to have land, so we’re going through the development application process again and continuing to build. That’s the goal, to continue to build more and more. We just want to serve the community as best as we can and build as many homes as we can. It takes a team to solve this crisis of affordable housing.”

Colonel Mike Atkins, the Wing Commander at 19 Wing Comox, was in attendance, along with 19 Wing personnel and representatives from St. George’s United Church.

Atkins noted that the pride and craftsmanship that’s gone into the homes at the Lake Trail site is outstanding.

McKenna said that work is also moving along at Habitat’s Campbell River site on Hilchey Road.

“We still could use a lot of volunteers on the Campbell River build,” he noted.

“We’re almost at the same point as here (Courtenay). We have four homes built, and two foundations that we will pour next spring. The city of Campbell River has been a tremendous supporter, and we’re part of the agencies that support the homeless coalition, and we just love building in that community.”