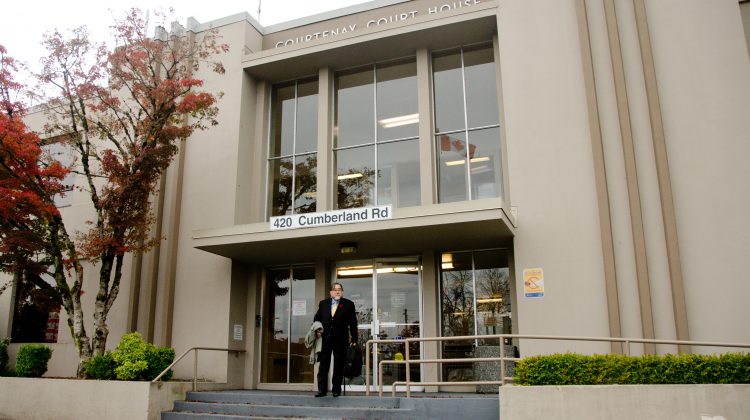 Roger Kishi is pictured as he leaves the Courtenay courthouse on October 30th, 2018, after getting a vote recount request granted for the Village of Cumberland. Photo by James Wood/98.9 The Goat/Vista Radio

Kishi, who had lost his Cumberland village council seat by two votes in the recent municipal elections,  brought an application to provincial court for a judicial re-count of Cumberland’s votes.

That request was granted just after 2:20 p.m. this afternoon, by the Honourable Judge Harvey.

The recount will happen tomorrow morning at 9:00 a.m. at Cumberland council chambers, presided over by Harvey.

Reached after the granting of the recount, Kishi was pleased with the decision. He had raised questions about possible errors in the ballot counting process, including the unintentional spoiling of some ballots due to errors by voters filling out their sheets.

“I think, in the judge’s decision, he has acknowledged that there was enough in his mind to determine that a judicial recount should happen,” said Kishi.

“He has asked that all the ballots be manually scanned, to see if the marks, didn’t really meet the mark of the machine. Tomorrow, we’ll go through the process of going through the ballots and this will be the first time since the election that the ballot boxes have been opened. They’ll be examined, and we’ll be able to determine, shortly, tomorrow, what the final results are.”

Every candidate who ran for the four council positions in Cumberland will be welcome to attend the recount, or an alternate they send in their place.

Sean Sullivan had beaten Kishi with 602 votes to his 600.

As for why Kishi applied to the courts in the first place, he indicated he had approached the village but was pointed in another direction.

“I was always pointed towards ‘oh, you need a judicial recount’, but under the elections procedure bylaw for the Village of Cumberland, there is a section for recount,” said Kishi.

“I can’t answer that question of why there wasn’t one.”

That question was answered by Rachel Parker, the village’s chief elections officer. Parker felt that voting had went smoothly, and didn’t think a recount was needed. The request from Kishi for a recount had also come in shortly before they had to produce official results.

Parker indicated the village election authourities had assisted Kishi with his court application, and was positive about the judicial recount being launched.

“I think it will be a good process,” said Parker.

“With the provincial court judge in attendance to help us determine the intent of any voter that didn’t mark the ballot correctly, I think it will be helpful to making a fair determination of the election results for the village.”

In the event of a tie, names will be drawn by lot to determine a winner for the fourth council seat, though it’s likely they won’t be taken from a hat.

“More likely from a box, than a hat,” said Parker.