UPDATE: One sent to hospital in Old Island Highway crash 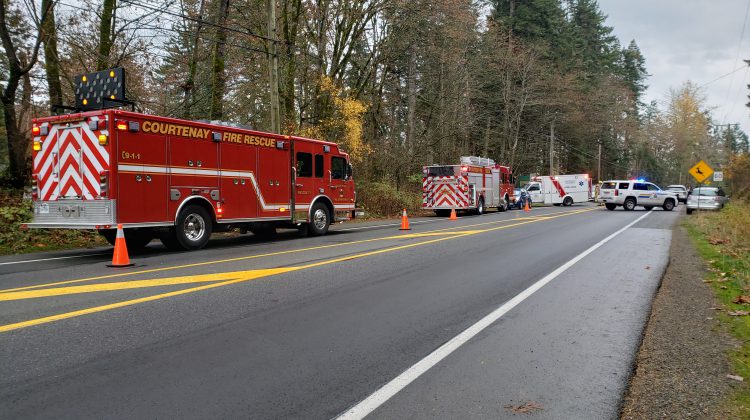 Emergency personnel on scene of a collision along Highway 19A in Courtenay on Nov. 3, 2018. Photo by Lena Pawluk/98.9 The Goat/Vista Radio

COURTENAY, B.C. – Three people suffered injuries following a collision on the Old Island Highway (Highway 19A) in Courtenay this afternoon.

The crash happened at around 2:00 p.m., just south of the Walmart, past Anfield Road. According to reports on scene, a van and motorbike collided.

The driver of the motorbike was conscious and alert when emergency personnel arrived on scene, and was taken to hospital by BC Ambulance crews. His current status is not known.

The driver and passenger of the van were also reported to be conscious when crews arrived, and suffered minor injuries. They were looked after by BC Ambulance personnel.

Crews blocked off the road, and traffic was turned around as the scene was cleared up.

The Courtenay Fire Department was cleared from the scene at around 2:50 p.m. Comox Valley RCMP also responded.