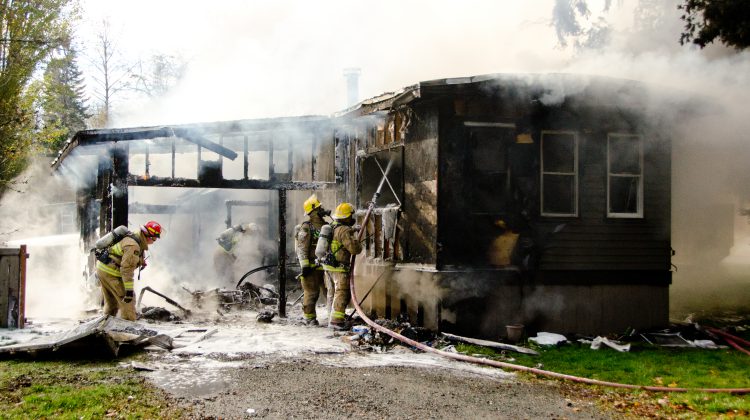 Members of the Courtenay fire department spray down a home that caught fire at the bottom of Braidwood Road on Monday afternoon. There were no injuries to the residents of the home, but the building was a total loss. Photo by James Wood/98.9 The Goat/Vista Radio

Crews were called out to the scene near Headquarters Road and Highway 19A, near the Real Canadian Superstore.

Courtenay Fire Chief Don Bardonnex said when crews arrived; the lone occupant of one of the trailers involved was outside of the building and was missing a couple of animals.

“There’s four people displaced in (a second) trailer and one in the trailer beside it,” Bardonnex said on scene.

“It was a pretty hot fire to begin with … the distance over radiant heat affected the secondary trailer.” 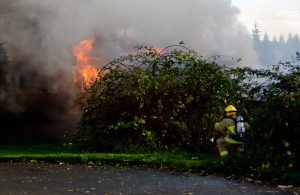 A member of the Courtenay fire department hooks up a fire hydrant to a hose line while responding to a structure fire at the bottom of Braidwood Road. Photo by James Wood/98.9 The Goat/Vista Radio

Bardonnex said the first trailer was essentially “completely destroyed”, and the fate could be the same for the second unit involved.

However, he noted that there were no injuries to be reported.

The cause of the fire is not known at this time.