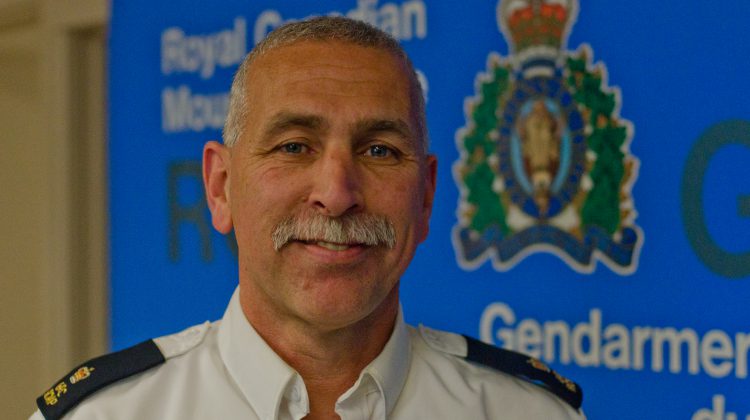 Inspector Mike Kurvers of the Comox Valley RCMP is pictured in the detachment on Thursday, November 1st, 2018. Photo by James Wood/98.9 The Goat/Vista Radio

COURTENAY, B.C- Inspector Mike Kurvers wants the police to be seen in the Comox Valley.

Kurvers is a 28 year veteran of the Royal Canadian Mounted Police, and recently came to the Valley to take charge of the area’s RCMP detachment, following the departure of Inspector Tim Walton. He previously served as the Inspector for Fort St. John in northern British Columbia, and had planned to retire before the role on Vancouver Island came up.

Kurvers spoke with the MyComoxValleyNow.com newsroom about his plans for the detachment, which he has been leading for the past month and a half.

According to Kurvers, the retirement papers were in when the opportunity to come to Courtenay came up, as he was “still on the books” with the RCMP. He had told the service that if something interesting came up to give him a call, because “he might say yes”.

Originally from the Victoria area, he’s worked in Saskatchewan, Richmond, Burnaby, Mission, subdivisions in Victoria, the Westshore detachment, and his time in Fort St. John. Once he got the call, a dialogue began which resulted in his move to the Valley.

He said that he and his wife knew of the Valley, but indicated that they hadn’t spent much time in the area beyond visits to Mount Washington.

“My wife has been up-Island to Campbell River and back,” said Kurvers.

Since coming, he said they love the community.

“It’s a lovely community, lots of things to see and do, my wife likes the art community, so she is starting to get involved with that,” said Kurvers.

He has one of her paintings in his new office. As for their kids, Kurvers indicated his children have left home and “have lives of their own”.

When it came to the plans that Kurvers has for the Valley RCMP, he indicated that it’s still too soon to say for sure.

“I have to be in place for a bit, before I can give you an honest answer,” said Kurvers.

He wanted to have a chance to judge everything about the current RCMP operations, and wanted to give it around six months. He did compare the detachment to the Fort St. John RCMP, and said the two detachments were similar, though the Valley had more officers.

As for challenges that could arise from the varied landscape that the police are responsible for, Kurvers indicated he wanted to speak with every community and work a sustainable plan.

“All our external clients, they all have different points of view,” said Kurvers.

He indicated that dialogue with those communities has begun.

Kurvers did touch on specific issues, such as problem houses in Courtenay. He said that a residence along 20th Street, which has been a frequent source of police calls, has now been emptied. Renovations by the owners are now ongoing.

“I know that there are a few houses, and that’s one of the complaints from Courtenay council, about these problem houses that for lack of a better word, have undesirable characters living in it, a bit of a criminal element, if I can say that,” said Kurvers.

“There is a couple avenues we can go, and part of it is talking with the city, and figuring out angles through the bylaws.”

Kurvers raised the idea of a nuisance bylaw with “teeth”, and the possibility of expanding the use of bylaw or peace officers getting authourity to deal with those homes. A dialogue on the matter is ongoing with the City of Courtenay, and the detachment is doing research on their own into the issue.

As for the possibility of an approach being taken to bill the owners of problem houses, Kurvers was less than enthusiastic, and indicated that kind of move would be something for municipal council to consider.

“You’re just putting more response back onto the homeowner, for taxes, that’s going to end up in a tax base for policing,” said Kurvers.

“Do we increase manpower, or do we bill people for police visits like a plumber showing up?”

He didn’t know if the idea would be very viable, and thought it would turn a few eyes with the public.

He also discussed the topic of a new home for the Valley detachment, indicating that the question of funding will have to be discussed at multiple levels of government.

“There lies the challenge, bringing everybody to the table, making sure we can fund it properly, because the number one thing is where the money is coming from,” said Kurvers.

“It’s easy to put a tenure out, and get it built, but who is going to fund it? Does it have to go to a referendum? What’s the funding formula? What’s the province going to put in? You remember, you have three communities, four, with the Regional District, with input to this. It’s a post detachment. Coincidently, Fort St. John just went through this, and they’ve got a start on their new building, but that’s a post detachment as well, municipal and provincial as well. Their funding is a little different than here.”

He said that “getting people to the table” is going to be his responsibility.

“Space is a big issue here (at the detachment), as you might see,” said Kurvers.

“We need space. This building is dated. With the feasibility study that was just done, the seismic upgrades are far costlier than a new building. Again, it’s a timeline, and dealing with the municipal governments and federal governments, that’s where the timelines lengthen.”

There is currently no timeline on a new building for the RCMP.

Another pressing issue was the land code of K’ómoks First Nation (KFN), which had caused some friction earlier in the year due to the police and the Crown not being familiar with the law.

Kurvers wants to fix that, and mentioned previous discussions with the leadership of KFN that had taken place during his initial interviews for the Valley position. Another meeting between Kurvers and KFN, according to him, is set for the end of October.

“The land code thing was before my time, that was an unfortunate turn of events, and we’re going to try and work through that,” said Kurvers.

“It’s unfortunate, I think it’s resolved itself now. We did engage our RCMP lawyer, and he’s still supposed to come here and meet Monty (Monty Horton, the KFN land manager) and work through that land code thing.”

He indicated that he’ll be using two officers from the detachment as direct liaisons with KFN going forward.

“We want to move forward, and open lines of communication. First step is going there and doing the meet and greet, making sure they’re comfortable with this office and me, and two members, that they’re ok with them being the liaison. It’s a simple formula, it’s just communication. So that’s where we’re starting. I know they were set back a little bit, with that land deal. I understand that, but we need to move forward, and look for solutions instead of dwelling on the past things.”

As for what residents of the Valley should generally expect from Kurvers at the helm, he emphasized visibility of officers.

“I’m a believer in visibility, and having a police presence,” said Kurvers.

“That means getting boots on the ground, so to speak. Having visible members, that’s more community-based policing. Police are more reactive than proactive, that is, we respond to calls. So, being proactive means having crime prevention. We’ve done already here, we’ve got two individuals working the crime prevention angle.”

“Get the officers on bikes, make that a full-time prospect. You see a cop, you know? We need to get out of the cars, talk to people. Be community engaged. That’s very simple. It’s just visibility. Get out of your cars, go do your job. The officers are doing a very good job here, they’ve got our full support. Part of that is community engagement, and talking to people.”