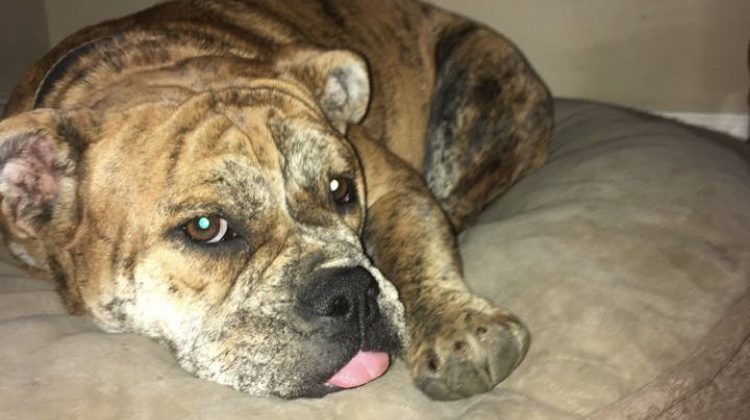 UPDATE: Mac is looking to crowdfund for a helicopter. The link to the GoFundMe is here: https://www.gofundme.com/help-find-rosie?fbclid=IwAR0gNseqVmuKXcUX7mizWCENmgF2BACFzph_b6pssmY3_EPoH5kCsgdYZSk

COURTENAY, B.C- A search for a missing bulldog swept down the Browns River is continuing today.

The dog is a one year old brindle brown Old English bulldog, named Rosie. She fell into the Medicine Bowls yesterday afternoon, while out with her owner Jonny Mac and his two other dogs.

Jonny Mac had been walking in the area around 3:00 p.m. when one of the three bulldogs fell into the water.

While trying to rescue the dog, Mac fell in as well, and his two other bulldogs fell in after him.

Comox Valley Ground Search and Rescue (CVGSAR) responded to the area, and examined the falls and the waters downriver throughout the evening. According to CVGSAR president Paul Berry, 14 members of the rescue organization turned out to the call.

Berry said that team members were placed in the water, and had good visibility into the Medicine Bowl pools.

“It certainly looked like anything that went into the water was being flushed out,” said Berry.

“We were not able to see her there, so there is a good possibility that she got out, though it is a 40 foot drop from the top of the falls to the water. We did search downstream for quite a distance, once it was completely dark, we pulled teams out for safety reasons.”

Nothing was trapped in the water’s eddies that they could see, and Berry believed that it was possible Rosie had gotten herself out of the water and into the bush, or carried on downstream. He was aware that there were other searchers in the area last night checking downstream along the Browns, with nothing located.

CVGSAR will not be heading out again today.

“Our priority is human life safety, but we certainly put an effort in last night,” said Berry.

“We certainly caution anyone who is going out there to stay away from the edge. The rock is very slippery, and the water levels in that part of the Browns is very flashy, it can go up and down very quickly.”

He expected friends and family of Mac to be out in the area searching today, and cautioned them to stay safe.

“People should stay off the rocks above the swift water areas above the Medicine Bowls,” said Berry.

“It is very slippery, there are very few handholds. If you do start moving downwards towards the water, there is virtually nothing to prevent you from going in, once you’re in, because the steepness of the sides and the amount of aeration and the high flows, the chances of getting out are slim to none.”

He also offered advice on where to look.

“Any trails up or down the Browns, below the falls, should be checked,” said Berry.

“Rosie is obviously a smart dog, and she is going to find someplace to go to rest and recover a little bit, if she’s injured, and she’ll be out wandering. Calling out for her, and stopping and listening would be important, but staying away from those hazardous areas, while you’re doing so.”

He said that CVGSAR hoped the best for Rosie, and was hopeful she could be found.

Mac is out searching the Browns River as of this publication. This story will be updated as more information becomes available.