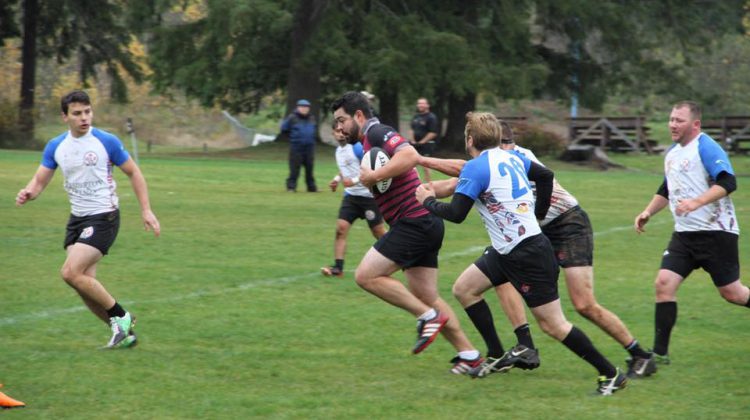 CUMBERLAND, B.C. – It was a tough go for the Comox Valley’s local rugby clubs. 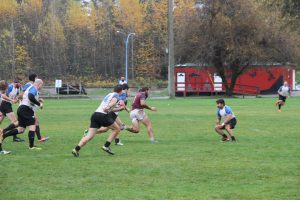 Flanker Brandon Hudson on a breakaway. Photo by Kevin Wells.

“We’ve definitely improved since our last game. Our scrums were strong, and we ran the ball well.  It was very much a back and forth game filled with hard hits,” said team captain Brandon Hudson.

“We had one try that was held up in the end zone and were unable to score from the resulting scrum. We missed some key tackles that allowed Westshore to score a breakaway try. Those two plays would
end up being the difference maker. All in all, I am very happy with how the team performed. We have a ton of potential and look forward to playing more rugby games.”

The women’s team suffered their first loss of the season, losing 34-7 to the Nanaimo Hornets. Karli MacFarlane scored the lone try for the Kickers, with Paula Simpson successfully kicking the convert. 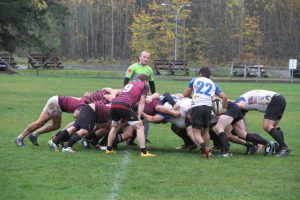 A scrum during the game. Photo by Kevin Wells.

“It was a cold and rainy rugby day, making it difficult to pass the ball out wide and use our speed. We were within 5 metres of scoring a few times during the game but were unable to capitalize. Those missed opportunities really hurt us,” said team captain Natalie Nguyen.

“We made too many mistakes and conceded too many penalties. At the end of the day, Nanaimo played
a better game and deserved the win. The big takeaway for us is how will we respond. We have a hard
schedule coming up, heading to Victoria on consecutive weekends after the bye. I am very optimistic
that we will be able to learn and grow from this loss and become an even stronger team going
forward.” 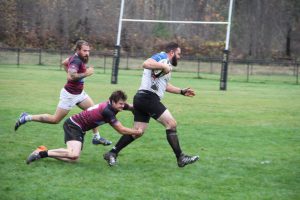 Both the men and the women’s teams are continually recruiting players. No experience is necessary.

Practices are held Mondays and Thursdays from 6:30 p.m. to 8:00 p.m. at Cumberland Village Park.