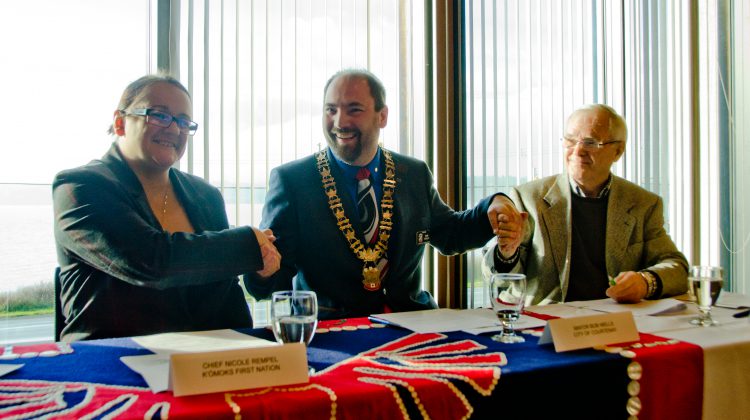 K’ÓMOKS FIRST NATION, B.C- An agreement outlining the future of the former Field sawmill site has been signed.

The agreement was a memorandum of understanding between the City of Courtenay, K’ómoks First Nation (KFN), and Project Watershed.

KFN’s Chief Nicole Rempel, Courtenay mayor Bob Wells, and Don Castleden from Project Watershed were all signers to the document, and added their signatures during an event at KFN’s band office on Wednesday.

The agreement is non-binding, but does formalize the partnership between all three parties when it comes to the plans for the sawmill site, which has been renamed Kus-kus-sum.

October 20th, 2019, has been set as the date for entering into a binding agreement which will lay out the plan to purchase, restore, and manage the property collaboratively.

After the signing, Rempel told the MyComoxValleyNow.com newsroom that KFN and the City of Courtenay have had an “intensely hardworking” relationship in the last year, and indicated that the plan for Kus-kus-sum is a shared vision.

The most important thing about the agreement, in her view, was sharing that vision and restoring what she described as an “ugly scar” on the Comox Valley to a more natural habitat, and helping salmon in the process.

The work on Kus-kus-sum, according to Rempel, is part of “truly bringing back the land of plenty”.

The former sawmill site is also of cultural and historical importance to KFN.

“It’s arguably one of the most important pieces in the Valley, to be returned to the K’ómoks First Nation, ancestral remains and ancestors being buried there,” said Rempel.

“It’s been a long time coming, and really looking forward to that return.”

Tim Ennis, a senior project manager for Project Watershed, said that fundraising is on track for the planned $500,000 in local contributions for the purchase and restoration of the site.

The total cost of purchase and acquisition has been set at $6.5 million, and information released by Project Watershed has stated that the purchase price of the land was less than Interfor, the current owner, was asking for.

The property is currently leased by Project Watershed from Interfor for $0. The value of the land was assessed in a real estate appraisal funded by both Interfor and Project Watershed, though the value has not been released.

“We’re confident that we’re getting a good deal,” said Ennis.

Gord Johns, the NDP MP for Courtenay-Alberni, spoke during the signing event and indicated that he and his provincial counterparts, Ronna Rae Leonard and Scott Fraser, are supportive of the project. He described it as a priority for the Comox Valley, the riding, and the environment.

“Project Watershed is looking for a good-sized amount of money from Ottawa and Victoria to be partners in this project,” said Johns, after the signing.

“They’re going to need some senior level of government funding to bring this project to fruition. We’re whole-heartedly behind this project and working closely with MLA Ronna-Rae Leonard and MLA Scott Fraser, and certainly communicating that directly to the Minister of Environment and Climate Change Catherine McKenna’s office.”

Johns said there have been “ongoing conversations” with McKenna’s office, and Project Watershed has a funding application in. He also believed the project has a lot of merit.

“We’re hoping that they see the benefit and strength of the project as we move forward.”

According to information from Project Watershed, 90 per cent of the project cost is expected to be met by government funds, foundations, environmental non-government organizations, and local philanthropists.

The plan is for the City of Courtenay and KFN to hold title to the land, with a restrictive covenant in place to ensure it’s “protected forever”. It’s expected that a third party partner will be in place to ensure that protection, such as the Comox Valley Land Trust, but negotiations on that front have not yet begun in earnest.

The site needs to be purchased no later than December 20th, 2019. If the required funds are not raised by that point, the site will go back on the market.

Once the property is purchased, restoration work can begin. The work will involve the removal and crushing of all the concrete, excavation and moving of fill that has been placed on site, the construction of a side-channel, and replanting across the entire landmass.

Removal of the current sheet piling wall is not expected to cause flooding on Comox Road, due to the replanting of ocean grasses and plants. The removal of a river bottleneck used by seals to hunt migratory salmon is expected to help the fish as well.

Contaminated soil has already been removed from the site following investigations in 2006, and backfilled with clean soil. However, Project Watershed does expect to find metal debris, wood waste, glass, plastics, and possibly contaminated material. They have contingency plans in their budget planning if that does occur.

Public access after restoration, with trails and viewing platforms, are part of the plan.