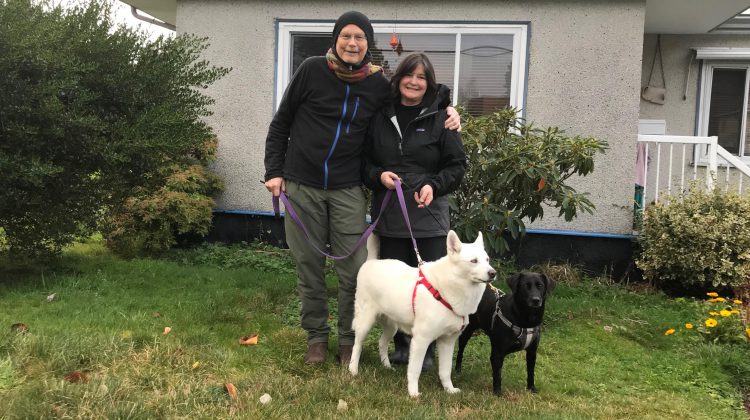 Jacqueline Huddleston posted on Facebook that pet owners should keep a close eye on their dogs and keep them on leash.

The warning comes after Huddleston’s dogs Lily and Sophie became seriously ill during a visit to Sunset Park on Nov. 13.

Huddleston said that during a moment of inattention, both dogs ate “some kind of dry dog food” which she believes was an undetermined amount of poisoned or spoiled dog kibble.

She noted that within 20 minutes of eating the food, both dogs were foaming at the mouth, vomiting and having diarrhea.

“I know it was kibble because that’s what was in their vomit (I only feed canned food and only after our morning walk),” she said in the post.

Huddleston notified the RCMP and the city parks manager and also put a “big warning sign” on top of a garbage can at the entrance at the end of Seaton Avenue.

According to Huddleston, she wasn’t the only pet owner to have dogs get sick from tainted food at the park.

“I also ran into two different people who said their dogs were foaming at the mouth after walking up there yesterday,” she said in the post.

Huddleston took her dogs to the vet to have their stomachs emptied, and so far they aren’t getting any worse.

She said her smallest dog, a lab mix which weighs 35 pounds, had to stay overnight at the veterinary clinic and was hooked to IV fluids because she had a bigger reaction than the husky.

Through blood tests and analysis of the vomit, Huddleston said the vet is “fairly certain” that there were contaminants in the kibble.

“They had very abnormal blood work,” Huddleston said. “Not only was there foreign substances in their blood, they both got pancreatitis as a result of this poisoning. And they both tested positive for the same problems.”

Huddleston said this one incident has cost her over $2,000 in vet bills.

“We certainly took her complaint seriously and at this point, there are no suspects,” he said. “We don’t even know for sure whether it was actually poison that the dogs ingested. That said, from what I understand, there are steps being taken to determine that. At this point there is an investigation ongoing.”

In the meantime, Huddleston is warning other pet owners to keep a close watch on their dogs in the area.

“I would hate for someone else to go through what I did this morning,” she said.