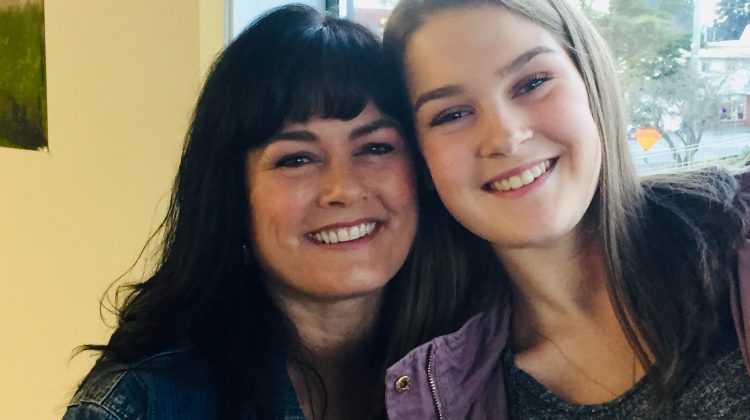 Brenda Murray and her granddaughter Jade Hansen visited 98.9 the Goat earlier this week to promote Jade's Coats for the Homeless. Photo by Troy Landreville/98.9 The Goat/Vista Radio

COMOX VALLEY, B.C. – The idea of Jade’s Coats for the Homeless was born a decade ago when a then six-year-old Jade Hansen came across a man using concrete as a bed.

She had taken in a play with her grandma Brenda Murray and after the two exited the theatre and made their way through the streets of Vancouver, they saw a homeless man lying on the sidewalk.

“I didn’t know why that person was lying there and why he didn’t look so warm and almost a little ill and my nana explained what it was to be homeless,” Jade said. “So I threw (a toonie) into his cup.”

As they continued on, the two encountered a woman wearing fake glasses, asking for money so she could afford a place to stay for the night.

Jade handed her $20, and on their way home that night, she decided she had to help, as many as she can, unfortunate people who don’t have a roof over their heads.

Fast forward to this Sunday, Nov. 18, and the 16-year-old is hosting a clothing and food drive at the RE/MAX location in Courtenay.

Visitors can donate warm winter clothes along with non-perishable food and hygiene products for people who are struggling in the valley.

But the Jade’s Coats for the Homeless charity drive isn’t limited to this Sunday.

Jade also collects coats, winter clothing, and feminine hygiene products and donates them to the Salvation Army throughout the year.

Jade switched schools from Mark R. Isfeld to G.P. Vanier and said support at her new school is going well.

At Mark R. Isfeld, she collected bins full of coats and warm clothing from the school community.

She’s hoping for much of the same at G.P. Vanier.

She has seen, first hand, the need in Courtenay.

“It’s not necessarily just homeless,” she said. “It’s those in need as well. So it’s just nice to know that what we’re doing can help them.”

For more about Jade’s Coats for the Homeless, visit the Facebook page.